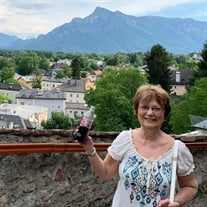 Joan R. Gandel, 76, of San Jose, CA passed away in Fort Collins, CO, on February 17, 2022. Joan was born to Thurman and Laurene (Petersen) Tolleson on March 10, 1945 in Selma, CA, and raised in Reedley, CA. She graduated from Reedley H.S. (1963) and received her Bachelor of Music from the University of Redlands (1967). A talented musician and gifted teacher, Joan went on to receive an M.A. in Music Education from Stanford University. Joan taught piano from her private studio for 60 years. She raised three daughters and was a dedicated friend. She loved laughter, chocolate, late nights, and traveling the world with family. Joan is survived by her daughter Denise (Damon) Kendrix of Elk Grove, CA, and their daughters Allison, Melissa, and Lauren, daughter Heidi (Rick) Jacobi of Fort Collins, CO, and their daughters Kimberly, Kaylee, and Kara, and daughter Jennifer (Jeremy) Ridgeway of Fort Collins, CO, and their daughters Greta and Clare. Joan is also survived by her sister, Janet (Bob) Zoller of Fresno, CA, and numerous nieces and nephews. Joan is preceded in death by her parents, Thurman and Laurene Tolleson, and her brother, Curt Tolleson. A private service will be held for Joan. A memorial in the Bay Area will be announced in the Spring.

The family of Joan R. Gandel created this Life Tributes page to make it easy to share your memories.