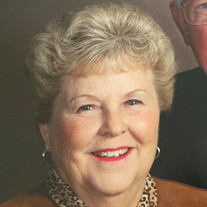 JoAnn M. Orzell, 85, of Fort Collins, CO formerly of Fayette and St. Louis, MO died February 16, 2021 after a brief illness. Due to ongoing pandemic concerns, a memorial mass will be delayed until June 23, 2021. This date is her 65th Wedding Anniversary, and will be a reunion with her beloved husband, Frank, for eternity. Internment will be held the same day, privately, at Grandview Cemetery, also in Fort Collins. JoAnn was born in St. Louis, MO on September 24, 1935 to Harold and Mary Myers. She married Frank Orzell on June 23,1956 and was later blessed with two sons, Steve and Mike. During her working career, JoAnn served in many capacities for various organizations, lending her organizational skills and administrative talents. She retired as the Executive Assistant to the President of ITT Commercial Finance. Upon retirement, JoAnn relocated to Fayette, MO where she and Frank enjoyed spending time on their 160 acre farm. In her spare time JoAnn loved working on arts and crafts, and had quite a creative talent. One of her favorite activities was decorating for all the holidays, especially the onset of Fall and Halloween. She also enjoyed family visits and spending time with her “country” grandchildren. JoAnn was a devoted and loving wife, warm and caring mother, mother-in-law, adopted grandmother and friend to many; including several girlfriends she remained in touch with since Grade School. She and Frank relocated to Ft. Collins in 2015. JoAnn is survived by her two sons, Steve (Domingos) Orzell of Sebring, FL and Mike (Pam) Orzell of Ft. Collins; dear friends, Jim (Susan) Groene, and their children Stephen (Sarah) Groene, Michele (Tyler) Hannegan, and Michael Groene (Mercedes Adams-Kloepfer); as well as two great-grandchildren, Kylie and Emmett Groene. Her family requests memorial donations be made to the American Lung Association.

JoAnn M. Orzell, 85, of Fort Collins, CO formerly of Fayette and St. Louis, MO died February 16, 2021 after a brief illness. Due to ongoing pandemic concerns, a memorial mass will be delayed until June 23, 2021. This date is her 65th Wedding... View Obituary & Service Information

The family of JoAnn M. Orzell created this Life Tributes page to make it easy to share your memories.