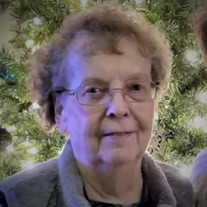 Joann Zeglin-Bengford, 87 was born in Anthon, Iowa to Ruby and Fred Zeglin. She attended Wayne State Teacher’s College for 2 years and taught first grade in Ida Grove, Iowa for 2 years. She married Leonard Bengford in 1956 and moved to Fort Collins, CO., raised four children, Greg, Doug, Kelly and Cheryl. She worked as an optician at Sears Optical in Ft. Collins from 1978 until she retired in 1998. Her favorite things include wonderful friends and family and she thought that more simple times make for really fond memories. She remembered walking downtown and having ice cream treats at Pitkin’s Drugstore during her lunchbreak at school when she was young. Probably her favorite past time was simply “visiting” with people. She had an abundance of pride being a housewife and mother. A homecooked meal was on the table every night. Joann loved to live her life walking alongside her guiding savior, Jesus Christ. Her faith in the Lord gave her courage and strength to face life’s challenges, many of which concerned her health. She cared for her husband, Leonard until his passing, July 12th, 2017. After that, dealing with her own health issues contributed to her everyday routine. She rarely complained and said, “It could always be worse”. Many thanks to her son, Greg. He devoted many days to helping out so that she could live in the home that she and Leonard built in 1959. Greg loved every minute of it. She was preceded in death by her husband, Leonard Bengford, her son, Douglas Bengford and her grandson, Mitchell Bengford. She is also preceded in death by her brother, Dewain Zeglin and his wife Shirley. She is survived by her son, Greg Bengford, daughters, Kelly Bengford-Lewis and Cheryl Bengford (Kim Dixon). She has 5 grandsons, Greg’s Ryan and Austin Bengford, Doug’s Tyler Bengford, and Kelly’s Jesse Lewis and Myles Blake. She has two step grandchildren Lynae Dixon and Luke Graepler with two great step granddaughters, Lynae’s Aubree Luethmers and Havana Snyder. She is also survived by her aunt Beulah Boe. Please join us in celebrating her life at 2:00 pm, Tuesday, September 7th at St. John XXIII Catholic Church in Fort Collins. Per Larimer County, masks are required for those who are unvaccinated and recommended for those who are vaccinated. In lieu of flowers donations can be made to St John XXIII Catholic Church.

Joann Zeglin-Bengford, 87 was born in Anthon, Iowa to Ruby and Fred Zeglin. She attended Wayne State Teacher&#8217;s College for 2 years and taught first grade in Ida Grove, Iowa for 2 years. She married Leonard Bengford in 1956 and moved to... View Obituary & Service Information

The family of Joann Zeglin-Bengford created this Life Tributes page to make it easy to share your memories.

Joann Zeglin-Bengford, 87 was born in Anthon, Iowa to Ruby and...