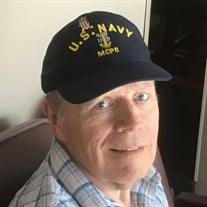 John Paul Allison, 78, died November 17, 2020 at his home in Fort Collins, CO after living with Alzheimer’s Disease for four years. John was born in 1942 to George Franklin and Josephine Weller Allison. John graduated from Monticello (IL) High School and enlisted in the United States Navy. He served 20 years in the Navy and rose to the rank of Master Chief, Electronics Technician. He attended the Naval Electronics and Crypto schools and served all over the world including Naval Station Great Lakes, Morocco, Italy, Antarctica (where he wintered-over), and New Zealand. John met his wife, Virginia (Ginny) May Proksch in Great Lakes, IL through mutual friends and forged an instant bond and love for each other. John and Ginny married November 30, 1968. John and his young family moved to Virginia Beach, VA in 1970, where he finished his Naval career. In Virginia Beach, John was stationed on the USS Raleigh LPD-1 and USS Guam LPH-9 at Naval Station Norfolk. Retiring from the Navy in 1980, John spent time in private industry on contracts with the Department of Defense. John worked on a key project in the early 1980s with the US Government’s aid in implementation of the communication centers for the Royal Saudi Navy and pre-planning stages for the recovery of the space shuttle Challenger. John finished his career as a civil servant in the Department of Defense at the Naval Undersea Warfare Center in Virginia. John was a lifelong learner and always took an opportunity to better himself. During his active duty in the Navy he was assigned to Tidewater Community College to receive his AAS degree and he continued his studies to earn a BA in Business, and Masters in Public Administration from The George Washington University. He served as an Electronics Instructor at the Great Lakes Naval Station and Tidewater Community College in Virginia Beach, VA. John and the family moved to rural and swampy Perquimans County, NC in 1990 to live a quieter life while continuing to work at the Department of Defense in Virginia, commuting in the wee hours through the Great Dismal Swamp. In 2006 John and Ginny retired from their careers and moved to Loveland, CO weary of multiple hurricanes and chores of maintaining woodland property. But they especially moved to be near their children and grandchildren in Colorado. John loved playing with his granddaughters and joking with them more gently than he teased his sisters as a young boy! John is remembered as a humble and faithful man, who loved his family dearly and cared deeply for the communities where he lived and worked. Over the years, John served in leadership roles in the Ruritan Association - Durants Neck in Perquimans County, NC and as lead coordinator to the Congregational Developer and as Congregational President of Good Shepherd Lutheran Church in Elizabeth City, NC. John was also a member of several faith and community groups including the Redeemer HOPE Group, Mens’ Book Studies, and the Albemarle Emmaus Community, Eastern NC Via de Cristo and CO Emmaus communities. John’s strong and quiet leadership with a servant’s heart made a lasting legacy on his family and community. John is survived by his wife, Virginia May (Proksch) of Fort Collins, CO; children John Jay of Boulder, CO and Richard (Angela) of Loveland, CO; grandchildren Grace Marie and Greta Virginia of Loveland, CO; sisters, Donna (Sandford) Lewis of Oak Harbor, WA and Connie Roberson of Bourbonnais, IL; brother-in-law Lyndal Nebel; numerous nieces and nephews. John is preceded in death by his parents, George Franklin Allison and Josephine Weller Allison; sister Bette Nebel; and brother-in-law Lee Roberson. The immediate family will hold a small Celebration of Life at Trinity Lutheran Church in Loveland, CO with a livestream for those unable to attend. The family asks that in lieu of flowers memorial gifts be made to one of the following: Pathways Hospice 305 Carpenter Road, Ft. Collins, CO 80525, https://pathways-care.org/ways-to-give/; Dementia Together 1540 Main St. Suite 218/231, Windsor, CO 80550, https://dementiatogether.org/give/; or Sky Ranch Lutheran Camp 805 S. Shields Ft. Collins, Co 80521, https://skyranch.org/pages/why-give.

The family of John Paul Allison created this Life Tributes page to make it easy to share your memories.