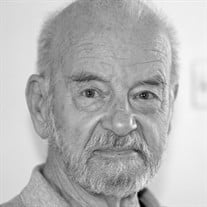 John Richard Angeli, was born January 4, 1923 and passed away December 18, 2019, surrounded by his family. The room was filled with sadness but at the same time many loving, funny childhood stories were shared with John by his children & grandchildren. John was born in Hazleton, Pennsylvania to Tyrolean immigrants, Giovanni and Barbara Anna (Prarizzi, Salvadori) Angeli. He was the sixth of eight children, 5 boys and 3 girls, with all 5 boys serving in the United States military. John was joined in holy matrimony with Shirley Ruth (Nichols) Angeli on August 23, 1946. To this union 6 children were born: daughters, Shirley Jean (Barb) Angeli & Kenneth Arnold, Mary & Barry Sabas, Cindy & John Minatta; and sons, John W. & Eileen Angeli, Mark & Marlene Angeli, and Arthur & Lindy Angeli; grandchildren, Brent Arnold, Kevin Arnold, Aaron Arnold, Tessa Angeli, Bryanne Ostoyich-Akers, Ryan Ostoyich, Jessica Keith, Mililani Sabas, Kiana Barber, Keoni Sabas, Kaipo Sabas, Bijou Angeli, Hollie Angeli, Elisabeth Angeli, Ashley Angeli, Jordan Angeli, Darik Angeli, Brandon Minatta and Nathan Minatta. He was a great-grandfather to 15 and great-great grandfather to 5. John attended the Hazleton Public School system and completed the eighth grade. As a child of an immigrant coal miner, one of ten family members and a child during the great depression, life was very difficult. A few of his youthful memories involved collecting coal from the roadside to help heat the family house, and selling the local newspaper on the corner. At the age of 16, John joined The Civilian Conservation Corps (CCC) and was assigned to a land survey group and shipped off to the mountains of West Virginia. In 1942, at the age of 19, John joined the United States Army, where he served for over three years, before returning to civilian life. Due to a stagnant job market he re-enlisted in the United States Air Force where he served in the Pacific from 1947 to 1953. It was in the military where John was educated in his life’s passion for medicine and became a medical technologist, specializing in lab and X-ray. During this time, John was mentored by a life-long friend Dr. Ernie Mullinaux. It was this friendship that led John from Norfolk, Nebraska to Julesburg, Colorado in February 1957. John was employed by the Sedgwick County Hospital in Julesburg, CO from 1957-68, Melissa Memorial Hospital in Holyoke, CO from 1968-74, and McKee Medical Center in Loveland, CO until he retired in 1999. John’s passion for medicine endured during his retirement, through his reading of medical publications. He also enjoyed stretching all the babies daily and debating his children and grandchildren about the topic of the day, especially politics. In his retirement years he had a large curiosity for how and why things operated the way they did and was always taking things apart and “attempting” to return to working order. He also connected with family in Italy and actually took a trip back to meet them. He stayed connected to them through the internet and loved discussing their family ties. The family would like to extend a sincere thank you to The Residence Oakridge staff for the personal care given to John over these past 4 years. He found many new friends there. And a thank-you to the doctors and nurses at PVH for their help and compassion during his last few days. In Lieu of flowers the family request that a contribution be made, in John’s name to Folds of Honor, Wounded Warrior Foundation or the Gary Sinise Foundation.

John Richard Angeli, was born January 4, 1923 and passed away December 18, 2019, surrounded by his family. The room was filled with sadness but at the same time many loving, funny childhood stories were shared with John by his children & grandchildren.... View Obituary & Service Information

The family of John Richard Angeli created this Life Tributes page to make it easy to share your memories.