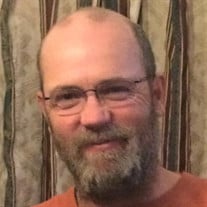 John Bartling, 40, of Wellington, died unexpectedly January 7, 2018 as a result of a motor vehicle accident near Sterling, Colorado. John Barton Tivis Bartling was born in 1978 in Rapid City, South Dakota to parents Bart and Sharon Bartling. He grew up in Union Center, SD, graduating from Sturgis High School in 1996. He later settled in Northern Colorado, where he has lived for the last 17 years. In 2004, John was married to Hilarie in the lovely Gateway Park in the Poudre Canyon. Those who worked with him knew that John was a hard worker. He was a shop manager at the Poudre Valley Coop in Fort Collins. John worked hard to provide for his family and care for those he loved. He was an avid hunter and a loving father and husband. John is survived by his wife, Hilarie Bartling; two daughters, Izabella and Gabbie; parents, Bart and Sharon Bartling; sisters, Denise Dobbs (Chet) and Danielle Hunt (Shad); nephews, Trey Dobbs, Jaden Hunt, Urban Kamann, and Jack Kamann; niece, Jazmyn Hunt; in-laws, Ed and Eve Scantling; sister-in-law, Ashley Kamann (Patrick); and many cousins, aunts & uncles. A memorial service to celebrate John’s life will be held at 2:30 pm, Thursday, January 11 at the River of Life Fellowship in Wellington. A reception will immediately follow the service at the American Legion in Fort Collins. In lieu of flowers please consider donating to the John Bartling Memorial fund at any Wells Fargo Branch or donating to: https://www.gofundme.com/support-the-bartling-family.

The family of John Bartling created this Life Tributes page to make it easy to share your memories.