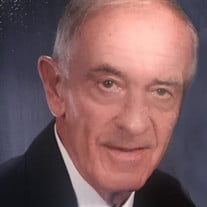 Dr. John Conger joined his Heavenly Father on June 22, 2020, after a battle with Alzheimer’s Disease. John grew up in Nezperce, Idaho with his parents and three brothers, both farming and helping his family run the Lewis County Herald. His early years were filled with sports, academics, boy scouts (earned eagle scout), fishing, and music. Receiving both music and academic scholarships, John attended Seattle University, where he met the love of his life, Carol. They were married May 13th, 1961 at St. Anne’s Catholic Church in Seattle, WA. Shortly thereafter, John graduated from Seattle University and went on to earn his Doctor of Medicine (MD) from the University of Washington. He continued his training at Great Lakes Naval Hospital in the Chicago area, and spent 1 year serving in Vietnam as a Nephrologist, creating the first dialysis unit aboard a US Naval hospital ship. He always remained very proud of the US Navy and his faithful service. Upon returning from Vietnam to his loving wife and, by then, 5 children, he completed his fellowship training at the University of California-San Francisco. In 1973, he moved his family to the wonderful state of Colorado where he became a Professor of Medicine on the staff of the University of Colorado-Denver and the United States Veteran’s Administration. In 2000, he retired from the VA as the Associate Dean and Chief of Staff of the VA Medical Center. John dedicated his professional life to the advancement of medical research in treating acute renal failure, where his research and publications are known globally. For many years after his service in Vietnam, the Federal Government requested John’s assistance in treating kidney failure related to combat trauma, and many of his techniques remain relevant in U.S. military medicine. Countless kidney patients have lived longer, richer lives, thanks to Dr. Conger’s efforts. As a devoted Catholic, John was active in many congregations throughout his life. St. Elizabeth Ann Seton Parish in Ft. Collins, CO provided him comfort and care in his final days. In addition to his professional career, John enjoyed reading, fishing, backpacking, mountain climbing, and traveling. He was a devoted husband and had a special relationship with each of his children, imparting the importance of responsibility, diligence, and consideration. He is survived by his wife of 59 years, Carol, and their five children: David Conger of Clifton Park, NY, James Conger (Suzan) of Denver, CO, Paul Conger of Fullerton, CA, Carolyn Harvey of Boise, ID, and Catherine Scholz (DeRay) of Castle Pines, CO. Grandchildren include Christina (Brandon) and John Conger, Kimberly and Christopher Conger, Grace and Leah Harvey, and Amanda and Daniel Scholz, and one great-grandchild, Mason. Services will be held at St. Elizabeth Ann Seton Catholic Church in Ft. Collins, Colorado on Thursday, June 25, 2020, including a Rosary at 10 a.m., followed by a funeral Mass at 11 a.m. His final resting place will be alongside his parents in Nezperce, Idaho. Donations can be made to: Alzheimer’s Association at www.ALZ.com.

Dr. John Conger joined his Heavenly Father on June 22, 2020, after a battle with Alzheimer&#8217;s Disease. John grew up in Nezperce, Idaho with his parents and three brothers, both farming and helping his family run the Lewis County Herald.... View Obituary & Service Information

The family of John Douglas Conger created this Life Tributes page to make it easy to share your memories.