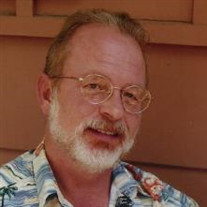 John Paul Richter of Fort Collins, CO, died Tuesday, April 21, 2020, at Poudre Valley Hospital, following a six-month battle with lung cancer. He was born February 15, 1956, in Chicago, IL, to John H. Richter and Barbara V. Richter (nee Voight). John grew up in Bryan, OH, the eldest of eight children. He attended Adrian College in Adrian, MI. In 1985, John moved to Fort Collins to join his mother and siblings. He began working in the kitchen of the Fort Collins Country Club in December 1985 as a seasonal employee. He met his wife, Judith Beebe, during that time. He worked for an animal testing laboratory from September 1986 through December 1996, when the company relocated to Missouri. In 1997, John began working for a subcontractor at the Hewlett-Packard site in Fort Collins. At the time of his death, having weathered all the changes taking place over the past twenty-three years, he was working for Able Maintenance, a subcontractor for Broadcom. In addition to his day job, John received a certificate in therapeutic massage in 1999. He saw clients in the family home for a number of years. John is survived by his wife, Judi Beebe, brothers Ralph and Eric, sisters Laurel, Diane, Jeanne and Rebecca, stepsons Stephen Beebe (Lara, three children) and Michael Beebe (two sons), and numerous nieces and nephews. John was predeceased by his parents and his brother Patrick. John was an eclectic soul, with interests ranging from harmonicas to didgeridoos, jewelry-making to knives and books and music of all kinds. At any given time, collections of musical instruments, knives for throwing and cooking, beads and stones, and walking sticks might be found throughout the house. The postal carrier was intrigued by the tall skinny boxes he was delivering. Didgeridoos are not easy to ship or store. John’s devotions extended to all animals as well. A number of pets shared our home throughout the years. John’s warmth and somewhat dark sense of humor will be missed by those who knew him. He was much loved by his family and friends. No service has been planned at this time. Cremation has been completed. But John would love it if you would raise a glass to him with a toast to send him on his way.

The family of John Paul Richter created this Life Tributes page to make it easy to share your memories.