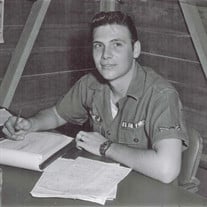 Joseph Alexander Cassone was born in Pittsburgh, Pennsylvania on October 14, 1944 to Joseph Cassone and Helen Haley. He passed away Dec. 24, 2019 at the age of 75 after a long difficult battle with lung cancer. He was married to Joan Cassone for 56 years. Together they raised three children, Joseph, Jr., Annette, and Tricia. He enjoyed every moment he spent with his family, especially at the end of his life. Joe was a young child when his parents decided to move to Southern California. He enjoyed growing up there and eventually attended South Torrance High School. After graduating from high school, Joe joined the U.S. Air Force. He was stationed at Niagara Falls Air Force Base in New York when he met his wife and got married. He spent 4 years in the service, including as assignment in Vietnam. Returning home, he decided to return to California with his family and he started working as a car salesman, a career he thoroughly enjoyed. Joe was an honest and friendly salesman and eventually was promoted to manager. He enjoyed his job and connecting with his customers. On a vacation trip through many states, he and his family stopped in Fort Collins to spend some vacation time and then decided that this city was the place he wanted to settle in. In 1977 Joe moved his family to Colorado where he continued his sales career by opening his own auto sales store. He was well known for his kindness, generosity, his quick wit and joking manner. Joe always enjoyed life and the adventure of traveling. Joe is survived by his wife Joan, his son Joe, Jr and wife Melanie, his daughters Annette and Tricia, and sister Pat. A special thanks to all the staff at the UC Health Cancer Center and Poudre Valley Hospital for their care, the in-home nurses Colleen and Linden who gave a lot of time and effort in giving him the nursing care he needed. Also a very special thanks to his very close friends Joe, Dan, and Jim who visited him almost daily during his battle with cancer. Joe, you will be dearly missed and our hearts can’t bear to say good-bye ---just see you later. In lieu of a burial service, A party to celebrate the life of Joe Cassone will be held on January 24, 2020, from 3:30 p.m. to 5:30 p.m., at the Island Grill Restaurant, 2601 S. Lemay Ave., Fort Collins, CO. Relatives, friends, and acquaintances are invited to attend. The family request any kind acts of generosity in his honor be made to St. Jude’s Children Cancer Research Centers, 1660 S. Albion Street, Ste. 916 Denver, CO 80222 Phone: (720) 440-6400 or (800) 287-3695 Also, donations can be made directly on line at their website.

Joseph Alexander Cassone was born in Pittsburgh, Pennsylvania on October 14, 1944 to Joseph Cassone and Helen Haley. He passed away Dec. 24, 2019 at the age of 75 after a long difficult battle with lung cancer. He was married to Joan Cassone... View Obituary & Service Information

The family of Joseph Alexander Cassone created this Life Tributes page to make it easy to share your memories.