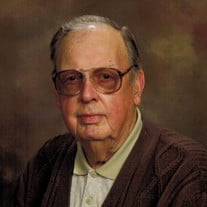 Joe Goebel, age 96 of Fort Collins, Colorado, died June 4, 2018 at the Hospice Care Center in Loveland, CO. A Memorial Mass will be celebrated at 3:00 pm Friday, June 8th at St. Joseph Catholic Church, 300 West Mountain Ave., Ft. Collins. His cremated remains will be placed with his beloved wife, Trudy in Ash Hollow Cemetery, Lewellen, Nebraska later this summer. Joseph James Goebel was born April 13, 1922 in Lincoln, Nebraska to Frank and Theresa Goebel. He served in the U. S. Navy during WWII aboard several ships in the North Atlantic and Pacific. He entered the Navy prior to the war and served throughout WWII, then was active in the Reserves until finally being discharged in 1954. In 1942, in Bremerton, Washington, Joe married Gertrude Lois Clary with whom he raised three children and spent the next 62 years until her death in 2004. During their retirement, they traveled with their 5th Wheel throughout much of the West living in places such as Brenda AZ, Warrenton, MO, Minneapolis, MN and several places in Colorado prior to settling in Fort Collins in 2005. Joe worked in management and sales of Ford Tractors and other heavy duty industrial equipment throughout his career. He also did some farming early on in his career. Joe was a devout Catholic; a longtime member of the Knights of Columbus and the American Legion and was an all around kind and nice man to be around. He is survived by his three children, Jim Goebel of Westminster, CO, Barbara Jo Kuhnley of Isanti, MN and Michael Goebel of Plymouth, MN; four grandchildren, Joe, Jeff, Kathy and Kristy; and 3 great-grandchildren. He was preceded in death by his wife, Trudy, granddaughter, Julie (who died in 2004); and eight brothers and sisters. Joe’s family requests that any memorial donations please be made to the Franciscan Missionaries, Catholic Charities or the St. Vincent DePaul Society in his name.

The family of Joseph James Goebel created this Life Tributes page to make it easy to share your memories.