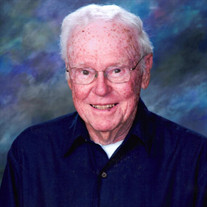 Joseph William (Bill) Nagle, 93 years old of Fort Collins, Colorado passed away peacefully at his home next to Carolyn, his beloved wife of 69 years, on June 16, 2021, from injuries sustained in a fall. Born in 1927 in a small town in central Kansas, Bill was the third of four children with an older brother Bernard, older sister Mary, and younger brother Jack. Bill grew up during the dust bowl and the Great Depression. His teenage years were scarred by the sudden illness and death of his younger brother Jack. His first paying job was working in a railroad round house helping to maintain steam locomotives during his summers in high school. Thus began a lifelong interest and involvement in working with heavy machinery. Graduating first in his high school class of 1945, and having passed the rigorous Radio Technician Selection Test, Bill was preparing to enter what was then possibly the best technical training program available in the Armed Services. While in the draft board office getting his physical on August 6 he heard the breaking news that the first atomic bomb had been dropped. Bill joined the flood of returning veterans and enrolled at the University of Kansas where he earned a B.S. in Mechanical Engineering. In 1950 he entered Notre Dame University, earning his M.S. in Mechanical Engineering in 1952. That same year he married Carolyn Peschka from his hometown. Like Bill, Carolyn was valedictorian of her class, graduating three years after him from the same high school. Bill then began what would become a long and successful career as a mechanical engineer in the chemical processing industry. He and Carolyn would soon see the arrival of daughter Elizabeth, son Mark, and youngest daughter Barbara. Several job transfers resulted in the family living in Kansas City, Orange Texas, Henderson Kentucky, and again in Kansas City before finally settling in Houston Texas in 1967. Bill’s work with Gulf Oil and later with Chevron took him around the world with trips to Europe, the Middle East, South America, and Asia. He became a sought-after expert on gas turbines used in large scale chemical processing plants — a far cry from the steam locomotives he worked on in high school. Throughout his busy career, and later in retirement, he was an exceptionally devoted husband and father. He also enjoyed going to reunions with his and Carolyn’s extended families in their hometown. By the late 1980s, with their children successfully launched, Bill and Carolyn left the heat and humidity of Houston to retire in Fort Collins. They built a new home and made many dear friends. Bill enjoyed woodworking and tinkering in his meticulously organized and well-equipped basement workshop. He volunteered at the Larimer County Jail, tutoring inmates in math to help them gain needed skills and education. He took up skiing while in his sixties and enjoyed family ski trips for a number of seasons before hanging up the ski boots. Bill and Carolyn were faithful and devoted members of Saint Joseph’s Catholic Church in Fort Collins for over thirty years. They were also big Notre Dame fans and supporters. Bill was a disciplined walker, taking his standard daily route, rain or shine, six days a week on the nearby Power Trail. It was here that he suffered his fall, no doubt hurrying to get home to Carolyn who was ill at the time. He is survived by his wife Carolyn; daughter Elizabeth Gremillion of Basalt Colorado; son Mark Nagle of Loveland Colorado; and daughter Barbara Kirkhoff, son-in-law Kevin Kirkhoff, and grandson Gabriel Kirkhoff of Houston Texas. A viewing for Joseph "Bill" Nagle will be held from 6:00pm to 8:00pm, on Wednesday, June 23, 2021 at St. Joseph Catholic Church in Fort Collins (300 W Mountain Ave, Fort Collins, CO 80521). Mass of Christian Burial will follow the next day, Thursday, June 24th, 2021 at St. Joseph Catholic Church, as well, beginning at 9:30am. Interment will take place at 12:30pm at Grandview Cemetery in Fort Collins. Please call Goes Funeral Care with any questions.

Joseph William (Bill) Nagle, 93 years old of Fort Collins, Colorado passed away peacefully at his home next to Carolyn, his beloved wife of 69 years, on June 16, 2021, from injuries sustained in a fall. Born in 1927 in a small town in central... View Obituary & Service Information

The family of Joseph (Bill) Nagle created this Life Tributes page to make it easy to share your memories.