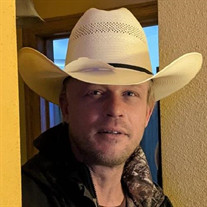 Joshua Edwin Bell, age 45, passed from this life on September 21, 2021 in Loveland, Colorado. Josh was born in Scotts Bluff, Nebraska in 1976 to parents Mary and Randy. He grew up in Erie Colorado, Phoenix, Arizona and Gretna, Nebraska where he graduated from high school. After graduating, Josh was something of a wanderer. He had a restless spirit that took him to Colorado, Arizona, Louisiana, Wyoming, and South Dakota. Josh spent some time as a machinist at High Precision in Longmont. He also worked for a tree service, where he invested himself in the cleanup efforts in Louisiana after Hurricane Katrina, a job that forever left an imprint on him. After moving back to Colorado, Josh found his true passion working with animals. He was known as the “bird man” and would often show up with a chicken or two in the back of his truck. It wasn’t unusual for him to have one as a roommate either. Josh also connected with horses and worked at the Circle I Ranch, home of the Cervi Rodeo Championship Team. He was working and restoring his relationship with his children and working toward becoming a Master Breeder. Josh was a free spirit. He had an array of talents and passions. He wrote and performed his own music for a time. He was an expert grower before finally getting the opportunity to create a path to living out his childhood dream. He was a natural caregiver, great with plants, animals, reptiles and people who needed his help. He enjoyed educating and helping children in 4-H. He was always ready to lend a helping hand to those who needed help. He was passionate, never afraid to speak his mind and had a kind and gentle soul. He loved his children and his animals and kept his circle of others around him tight. Josh faced all challenges that this life threw his way with courage, strength and determination. The one dream Josh was not able to fulfill was capturing more moments and spending more time with his children. Josh persevered over all challenges, overcoming life’s obstacles courageously. He loved the simple life and being at the ranch was his “heaven on earth”. He often visited his favorite horse on the ranch named Dust Storm and referred to his visits as equine therapy. Many of us spend a lifetime searching for a way make a living doing what we love, Josh found that. Josh is survived by his mother, Mary Knott; his father, Randy Bell; two children, Brody and Lily; sister, Anne Haftings; brother, Jake Kennel; sister, Jessica Dart; sister, Sally Pitman; brother, Garrett Bell; girlfriend, Lacreshya Smith; and the “big brother he never had”, Harold Burke. A Celebration of Life is planned for 10:00 am, Saturday, October 9, 2021 at Carr Community Church in Carr, CO.

Joshua Edwin Bell, age 45, passed from this life on September 21, 2021 in Loveland, Colorado. Josh was born in Scotts Bluff, Nebraska in 1976 to parents Mary and Randy. He grew up in Erie Colorado, Phoenix, Arizona and Gretna, Nebraska where... View Obituary & Service Information

The family of Joshua Edwin Bell created this Life Tributes page to make it easy to share your memories.

Joshua Edwin Bell, age 45, passed from this life on September...