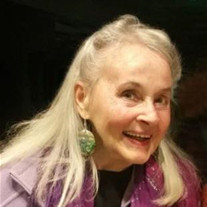 After almost three years living with advanced lung cancer, Dr. Judith Elaine Mikeal Gross died peacefully and surrounded by family in her home in Fort Collins, Colorado, on October 8th, 2017 at the age of 76. She is survived by her daughter, Rosa Mikeal Martey, son-in-law Nii Martey, granddaughter, Rowan Martey, and brother, Stephen Mikeal. Judith's love, support, and boundless wisdom will be deeply missed. Judith was born in High Coal, West Virginia in 1941 to Ruth Petty and Frank D. Mikeal. High Coal was one of the many "coal camps" of the region - towns created and run by coal companies in the first half of the 20th century - where her father worked as a coal miner for Anchor Coal Company. Judith attended Maryville College in Tennessee ('63), and then received a Master of Arts in history from the University of North Carolina, Chapel Hill ('65), where she studied the labor union leader "Mother Jones." She went on to get her Ph.D. in economics at Princeton University in 1975, and taught as a professor at Rider University in Lawrenceville, NJ, for 6 years. She later received a Master's of Education in English as a Second Language from the College of New Jersey and taught ESL at the local YMCA for several years. For over 30 years, she lived with her husband Graham Gross and their daughter Rosa Mikeal in Princeton, NJ. After the passing of her husband in 2015, Judith moved to Fort Collins, CO to be near her daughter and her family. Judith and her husband were active participants in the Civil Rights and anti-war movements of the 1960s and 1970s, and Judith worked for the "Poor People's Campaign" of the Southern Poverty Law Center, organized by Martin Luther King in 1968. Although they attended fewer rallies, sit-ins, and protests after the birth of their daughter in 1970, Judith never stopped wearing her Birkenstocks. Throughout their nearly 50 years of marriage, the Grosses loved throwing lively parties, especially for St. Patrick's Day. They hosted no fewer than 5 weddings for friends and family at their home, along with numerous graduation, New Year's, Christmas Eve, 4th of July, and cast parties for their daughter's musical and theatrical activities. Every party required a little Jimmy Cliff, a little Dolly Parton, and, if we were lucky, even some Pavarotti or John Phillips Souza. Judith loved music, and she attended almost every concert or show her daughter performed in for 35 years. Judith lived a life full of enduring curiosity, learning, and kindness that she shared with all those she encountered. Judith was an avid reader and a dedicated diarist. She left over 60 years' worth of near-daily dairies chronicling her day-to-day life from age 15 onward. And she was proud to be a coal miner's daughter. Services will be held in Fort Collins, CO, on Saturday, November 11th, at 11:00 a.m. at St. Luke's Episcopal Church. A second service will be held in Princeton, NJ at the end of January, 2018. Contact Rosa M. Martey for details. In lieu of flowers, donations may be made in Judith's name to National Public Radio, which she listened to every day over most of her adult life: Colorado Public Radio, Attn: Specialty Giving, 7409 S. Alton Court, Centennial, CO 80112.

After almost three years living with advanced lung cancer, Dr. Judith Elaine Mikeal Gross died peacefully and surrounded by family in her home in Fort Collins, Colorado, on October 8th, 2017 at the age of 76. She is survived by her daughter,... View Obituary & Service Information

The family of Judith Mikeal Gross created this Life Tributes page to make it easy to share your memories.