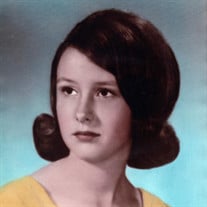 Judy Halsey, of Loveland, Colorado, died peacefully due to complications of a hemorrhagic stroke on Monday, March 25, 2019 at Spring Creek Healthcare Center in Fort Collins, Colorado. She was 65. Judy was born Judy Lee Johnson in Hot Springs, New Mexico (later renamed Truth or Consequences), on April 6, 1954, to the late Lyle and Ruth Johnson. The family lived in Hatch, New Mexico through Judy’s early teenage years, then moved to Durango, Colorado in 1971, where Judy attended Durango High School, graduating in 1972. Later that year, Judy married George R. Golombowski and the newlyweds settled in Farmington, New Mexico, where George began a long career in the powerplant industry. Judy studied nursing and attained a CNA certification before giving birth to two boys, Michael Lyle and George Matthew (known as Matt) in 1975 and 1977, respectively. Judy and George divorced while the boys were young and Judy entered a deep depression lasting several years, during which she ultimately relocated to Phoenix, Arizona, where her brother Gary lived. While in Phoenix, Judy met Stephen Douglas Halsey, a Navy veteran who helped care for her during an extended hospital stay. After her recovery, they fell in love and married on May 9, 1985. Together, they launched Admiral’s Pest Control, where Judy handled the office work. After several years, they closed the business and relocated briefly to New Mexico and Utah, finally settling in Loveland in 2001, where they remained long-term. Judy loved tennis, watching Little League championships on TV, and listening to classic rock. She was proud of her Swedish heritage, and worked hard to care for her parents at the end of their lives, only a few years prior to her own passing. In the last couple of years, she had found an inner peace that shone through in her exuberance for life, and she was happy to have one of her sons and his family nearby to share that with. Judy is survived by her husband of nearly 34 years, Stephen Douglas Halsey of Loveland, Colorado. She is also survived by sons Michael Lyle Golombowski of Concord, North Carolina and George Matthew Golombowski of Severance, Colorado, brother Stacy Aaron Johnson of Centennial, Colorado, four grandchildren, and several nieces and nephews. She was preceded in death by her brother, Gary Bruce Johnson, and parents, Lyle Gordon and Minnie Ruth Johnson. Services will be private. Memorial contributions can be made in her name to the American Stroke Association.

The family of Judy Lee Halsey created this Life Tributes page to make it easy to share your memories.

Judy Halsey, of Loveland, Colorado, died peacefully due to complications...