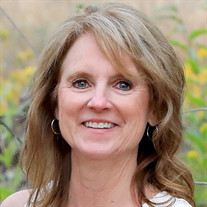 Kelly Marie Henderson, 59, of Windsor, Colorado, entered eternal life on December 11, 2021. Kelly was born December 20, 1961 to parents Irvin and Marilyn Lange. Throughout her childhood, the family moved many times, as Irvin served in the United States Air Force. They lived in England, Montana, Colorado, Germany, California, and then settled in Colorado. Kelly graduated from Central High School in Aurora, where she met Joel Henderson. She and Joel were married April 19, 1980 and spent 42 years together, raising three daughters. Kelly was a holy woman, devoted to God and the church, as well as her family. These two loves were the framework of her life. She was determined to send her girls to Catholic school, volunteering and working hard to do so. Much of her time was spent in service to the church, singing in the choir, teaching at the Montessori school, and working on the funeral committee. She was especially passionate about singing in the church choir and she was blessed with a beautiful voice. Kelly also enjoyed gardening and sitting around a fire with people she loved. It was always Kelly’s priority to be sure everyone was cared for. She focused on keeping the family together and she organized family gatherings as often as possible. A loving wife, caring daughter, attentive mother, and servant of God, Kelly will be missed by so many. Kelly is survived by her husband, Joel Henderson; daughters, Sara (Garret) Mick, Kayla (Sam) Fazio, and Paula (Patrick) Barnett; parents, Irvin and Marilyn Lange; siblings Kenneth Lange and Keith Lange; and 6 wonderful grandchildren. She was preceded in death by her sister, Kathy Arbogast. A Rosary will take place at 10:30 am, followed by a Funeral Mass at 11:00 am, on Monday, December 20, 2021 at Our Lady of the Valley Catholic Church in Windsor. A reception will follow the Mass. In lieu of flowers, donations may be made to Our Lady of the Valley and Mary's Cradle.

Kelly Marie Henderson, 59, of Windsor, Colorado, entered eternal life on December 11, 2021. Kelly was born December 20, 1961 to parents Irvin and Marilyn Lange. Throughout her childhood, the family moved many times, as Irvin served in the... View Obituary & Service Information

The family of Kelly Marie Henderson created this Life Tributes page to make it easy to share your memories.