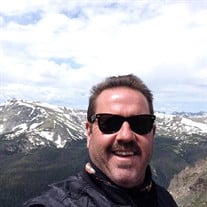 Kurt Edwin Meyer passed away November 28, 2016, at the McKee Medical Center in Loveland, Colorado, following a brave battle against cancer. He was 51. Kurt was born in Colorado Springs, Colorado and moved with his family to Sargents, Colorado in 1980, spending his first summer helping his father build their home. He attended Gunnison High School, graduating in 1984. After graduation, Kurt joined the United States Air Force and became a jet aircraft mechanic. He earned his Airframe and Powerplant degree while serving all over the world in such places as Alaska, South Korea, Jordan, Saudi Arabia to name a few. While stationed at Mountain Home AFB in Idaho he was selected as Crew Chief of the Year for his excellent work in maintaining his F-16. Following his Air Force career, he stayed in the same field, working for Horizon Airlines and then his last position as Operations Manager at International Governor Services in Denver. He “lived out loud” is the best way to describe Kurt. He loved nature, hunting, fishing, camping; and he especially loved riding his beloved Harley motorcycle. He belonged to a Christian Mens’ Motorcycle Club in Windsor, Colorado. But his greatest love was his family. He is survived by his wife, Carol Hall Meyer of Windsor, three step-daughters Emily, Mallory and Abbey Tukhanen of Windsor, his son Nick Meyer of Gresham, Oregon, his mother Kate Meyer of Montrose, Colorado, his sister Laura Meyer Lukassen of Gunnison, Colorado and niece and nephew Amelia and Van Lukassen. He was preceded in death by his father, Bob Meyer, of Sargents. Cremation has taken place and a celebration of Kurt’s life will be held next July in Gunnison, during the week of Cattlemens’ Days. Kurt was a generous and loving man who will be sorely missed by his family and wide circle of friends.

Kurt Edwin Meyer passed away November 28, 2016, at the McKee Medical Center in Loveland, Colorado, following a brave battle against cancer. He was 51. Kurt was born in Colorado Springs, Colorado and moved with his family to Sargents, Colorado... View Obituary & Service Information

The family of Kurt Edwin Meyer created this Life Tributes page to make it easy to share your memories.