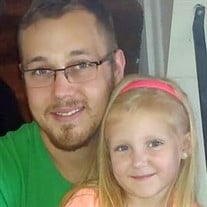 Our beloved Landon P. Sager left this world on February 17, 2020 at the age of 28, after a long courageous battle with brain cancer. At the time of his passing, he was in the comfort of his own home surrounded by his amazing partner of 5 years, Elise Gusinde-Duffy and her mother Tini, his mother Tracy, and little sister Sydney. Landon was born September 17, 1991 in Fort Collins, Colorado to Tracy D. Sager with older brother, and lifelong best friend, Morgan Sager anxiously awaiting on the sidelines. He was later joined by “hims” loving baby sister, Sydney Sager. As a child, Landon shared wholeheartedly in his big brother’s love for Power Rangers, always eagerly obtaining the role of the blue ranger, and spent hours on end playing Transformers and building Legos with Sydney. Landon graduated from Rocky Mountain High School in 2010 and continued on to Front Range Community College to pursue a career in the automotive industry. Landon had a passion for fast cars, mountain drives, snowboarding, and camping with friends. He loved listening to and making his own music. He enjoyed attending EDM shows with friends and had even aspired to play shows of his own someday. On March 6, 2013 Landon became a father to his beautiful daughter, Hadyn Sager. It was the happiest day of his life. Landon loved his daughter with every fiber of his being. She was his world. Hadyn always said that her daddy was her best friend, as she was his. Landon was at his very best when he was with Hadyn and took his role as her protector, her playmate, her adventure seeker, and her partner in laughter very seriously. Landon wanted nothing more than to be here for his Hadyn. Landon was an amazing daddy, son, grandson, brother, nephew, cousin, and friend. He will never be forgotten and will live on forever in our hearts. Along with his mother, brother, sister, daughter, and partner, Landon is also survived by his grandmother Margaret Sager, Aunt Terri Sager, Uncle Norm (Lauren) Sager, cousins Derek and Dilan Faucher, brother-in-law Josh Wilcox, father Paul Ingersoll, brother Nick Ingersoll, and many more aunts, uncles, cousins and amazing friends. Landon was preceded in death by his grandfather Norman O. Sager, aka Pop Pop, who we know greeted him with a huge smile and open arms. Landon’s Celebration of Life will be held on February 28th, from 5pm-9pm at the Drake Centre in Fort Collins. The family requests that you each bring a smile on your face and a fun story about Landon to share. We will be providing glow sticks for everyone and we ask, if you can, to wear Landon's favorite color (Tiffany blue) in support.

Our beloved Landon P. Sager left this world on February 17, 2020 at the age of 28, after a long courageous battle with brain cancer. At the time of his passing, he was in the comfort of his own home surrounded by his amazing partner of 5 years,... View Obituary & Service Information

The family of Landon Paul Sager created this Life Tributes page to make it easy to share your memories.