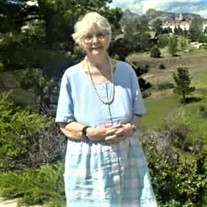 Lavonne Mary (Poling) Grosche, 90, of Greeley died Monday, Jan. 25, at Bonell, Good Samaritan Society Skilled Nursing Care Facility in Greeley. The cause of death was complications from Alzheimer’s disease Lavonne was born on March 8, 1930, in Letcher, South Dakota, to Gerald and Isabel Poling. The family moved to Boone, Iowa in 1936 and to Geneva in 1939. She graduated from Geneva Consolidated High School in 1948 as class valedictorian. She was proud of her letters in basketball, softball, and band. In April 1949, she married Arne Grosche, of Hampton IA, in Minnesota. She lived in Hampton for two years and returned to Geneva. While in Geneva she developed a life-long career working at Boots’ Insurance Agency and later at the R.G. Wolf Agency. She was also active in her church, St. Paul’s Catholic Church, playing organ and directing the choirs in Geneva, Hampton and Dumont. She served as Secretary of the Democrat Party of Franklin County and served as the Geneva Town Clerk. She suffered from bronchiectasis and had three major lung surgeries between 1953 and 1957. Doctors at the Mayo Clinic said that she would never see her children graduate from high school. In 1960, Lavonne and family moved to Denver, CO, in hopes that a dry climate would help her life-long lung issues. It did. The family moved several times after 1960 living in Westminster, Greeley, Rawlins WY, Grand Junction, Arvada, Englewood, Aurora, Farmington NM, Brighton, Ft Collins, Scottsbluff NE, and finally Ault before her admittance to Bonell Community. In many of these places she continued to play organ and direct the church choir. She served as a Red Cross Gray Lady in Rawlins. She also continued to work in insurance. In 1980, Lavonne and Arne opened Great Divide Adjusting, taking advantage of their insurance expertise. In the 1990s a life highlight was an article for Women’s Professional Day in The Coloradoan on Lavonne, her daughter, Mary , and granddaughter, Laura. The article focused on Lavonne’s career in the 1950s, seeing her as a trail blazer. She talked about her experiences and on the increased options for today’s woman. She and Arne loved to travel. They also argued – a lot! At one time they owned an Airstream which the family nicknamed “The War Wagon!” They visited the East coast from ME to FL, Quebec City, The West coast from AK to CA, Las Vegas and her favorite place, Yellowstone. They also traveled to Alaska with her daughter, Lee, and son-in-law, David. They traveled to visit all of their children and were able to enjoy the varied sites of where they moved. Lavonne was proud of playing the piano and organ. In addition to playing for her church, she and her sister, Maxine who sang, performed on the local CBS outlet in Mason City IA. She was proud of her scrapbooks which focused on her travels and photos of her family. Lavonne was proud that between Arne, her sons and a daughter-in-law, they had 70 years’ service in the Army. David Lassen and Lee got involved in the Single Action Shooting Society in the 90s. Arne always loved to shoot and doing so in Western dress added to the draw. Lavonne enjoyed dressing up for the Single Action Shooting Society and the people that she could meet. Lavonne is survived by two sons, LTC (Ret) David Grosche and wife Wanda of Colorado Springs, LTC (Ret) Michael Grosche of Lake Meade, NV, and his ex-wife Valerie LaForge of Webster NY; two daughters, Mary Balza and husband John of Ft. Collins and Lee Ann Lassen and husband Dr. David of Aurora; six grandchildren, David Arne and Kirstine Grosche of Colorado Springs, Kate and Dan Grosche of Webster NY, Laura Balza Lucid and husband Greg of Circle Pines, MN, Beth Balza Campbell and husband Tommy of Colorado Springs; and two great-grandchildren, Mallory and Claire Lucid of Circle Pines MN. She has a surviving sister, Maxine Johnson, of Greeley. Her parents and sister, Dorothy, and husband, Arne, are deceased. A Memorial Mass will be held at 1 p.m. on July 21 at Our Lady of the Mountains in Estes Park followed by interment at Estes Park Cemetery.

The family of Lavonne Grosche created this Life Tributes page to make it easy to share your memories.