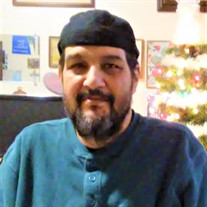 Lawrence was born August 9, 1967, in Trinidad, Colorado. The first of three children to Judith Al-Anzi and Hasan M. Al-Anzi. He died January 29, 2022, in Fort Collins, Colorado. He is preceded in death by his beloved grama and grampa (Juanita & Richard Martinez of Trinidad, Colorado), and his stepfather (Bill Rhodes of Wellington, Colorado). He leaves behind: six children: Garion (Ayla); Aria; Ebba; Elias; Germaine; Iain; two granddaughters: Thalia Rose, 5; Ce’Nedra Rose, in utero; his loving mother Judith; two sisters: Stephanie Palmier, and Missy (Greg) Reynolds; his Godmother Stephanie (Dennis) Gallegos. Lawrence loved to learn and read (he always had a book with him). When he was 4years old he would sit with an encyclopedia book and look at the pictures and when something interested him he would ask his “mama” to read the words to him. One day he decided that he wanted to read it for himself and in just a few days he was able to read. He, his mother, and sisters would read to each other and have fun with discussions and inside jokes from the various books they read together. As a child, his family moved around from Trinidad, Colorado to Boise, Idaho where he became skilled at archery and learned to ski, in junior high, he was on the basketball team and in the marching band playing the saxophone; then he moved to Fort Collins, Colorado attending Lincoln Jr. High and Poudre High School where he continued to play the saxophone. Later the acting bug got him. He joined the mime group and was given a part as a member of the Sharks gang in the Tri-High Musical “West Side Story”. Lawrence was blessed with artistic talent of every kind. One of his paintings was displayed in the State Capitol Building. He also had a beautiful voice singing for a short time in the choir at church, singing in the acapella group at Poudre and even delivering singing balloon o’grams around town. During his late teens, he and his friends would breakdance, and he was good at that too. In the early ’80s, his new stepfather moved the family to Wellington, Colorado where his mother still resides. In the late ‘80s, he married his true love, Tiffany Onley (divorced). Always a science fiction buff - he was captivated by the first Star Wars movie and was an avid Star Wars Fan for the rest of his life. The last show he watched was the latest episode of The Book of Boba Fett. He also loved computers and they became his passion. His last job was Customer Technical Support for Google Fiber in San Marcos, Texas. Lawrence was a soft-spoken genteel man. He was articulate and friendly, easily striking up conversations with strangers. He had a beautiful smile and a great sense of humor, always quick with a joke or a pun for nearly every occasion. He is so loved and so missed. Rosary 6:00 PM, Thursday, February 10, 2022, Saint Joseph Catholic Parish, 300 West Mountain Avenue Fort Collins, Colorado 80521. Memorial Mass, 2:00 pm, Friday, February 11, 2022, Saint Joseph Catholic Parish, 300 West Mountain Avenue, Fort Collins, Colorado 80521. Please use the following link for live-stream access to Lawrence's Mass: www.youtube.com/c/SaintJosephCatholicChurchFC Interment 2:30 PM, Monday, February 14, 2022, Highland Cemetery, 9192 NE Frontage Road, Wellington, Colorado 80549.

Lawrence was born August 9, 1967, in Trinidad, Colorado. The first of three children to Judith Al-Anzi and Hasan M. Al-Anzi. He died January 29, 2022, in Fort Collins, Colorado. He is preceded in death by his beloved grama and grampa (Juanita... View Obituary & Service Information

The family of Lawrence Hasan Al-Anzi created this Life Tributes page to make it easy to share your memories.