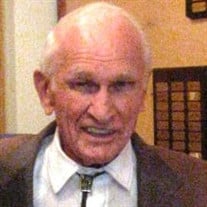 L. Duane Burk, born October 30, 1913, in Rippey, Iowa; passed away June 20, 2016, in Loveland, CO at the age of 102. He married Helen Bugbee on Aug. 8, 1937 in Perry, Iowa. She preceded him in death Dec. 5, 2015. Together they were partners in many businesses, starting with a filling station in Perry. Next was a movie theater in Monroe, Iowa, which Helen had to run while Duane was in the Army Air Corps during World War II. In 1950, they moved to Colorado where they built a small motel while Duane worked nights at the Greeley Daily Tribune as a pressman. Their next venture was Budget Rent-a-Car of San Diego for a year. They moved back to Colorado where they owned and operated a motel, several restaurants, and a candy store in the Blackhawk - Central City area. Since many of their later businesses were for the summer tourist trade, they enjoyed winters in Arizona for many years. After retirement, they moved to the Big Thompson Canyon, and then later to Loveland, Colorado. He is survived by two sisters - Juanita Dixon of Westminster, Colorado, and Maxine Hunter of Council Bluffs, Iowa; two daughters - Donna Huckaby (Olan) of Loveland, Colo. and Sandra Billings (Herb) of Pagosa Springs, CO. Duane had four grandchildren - Shawn Huckaby (Amy), Mark Huckaby (Kara), Kimberly Mordan (David), Benjamin Billings, and seven great-grandchildren - Dexter, Maxwell, and Paris Huckaby; Adele and Hayden Huckaby; Alex and Megan Murray. Duane was a hard worker, a wonderful father and grandfather, and a big Bronco fan. He will be greatly missed. A memorial will be held as a part of the church service at 10 a.m. Sunday, June 26, 2016, at Drake Chapel, meeting at the Big Thompson Canyon Association building next to the fire station one mile East of Drake, Colorado on Highway 34.

The family of Leo "Duane" Burk created this Life Tributes page to make it easy to share your memories.