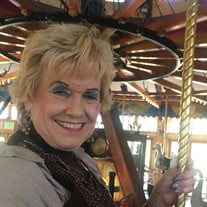 Heaven gained a beautiful and laughing soul as Leona Rittenhouse (75) joined her Savior and was lifted to everlasting peace on March 26, 2018, following a short challenge from brain cancer. Leona was born in Chadron, Nebraska, August 17, 1942. Leona met Larry Rittenhouse in the summer of 1960 at a church function, where they started a long-distance relationship and were married the following summer June 13, 1961. From there they began their 56 year journey together. Leona and Larry moved with their family to Fort Collins in 1978 where Larry joined the Colorado State University faculty in the Range Science Department. The most important thing in her life was family. She was the family matriarch. She kept everyone going with family functions, including 4th of July parade floats, and making every holiday special. Her philosophy was “whatever it takes keep family close, create memories, and love the grandchildren.” Friends, faith and family were always the center of her world. She served in her church with the Children’s ministries. She did everything from opening a bakery, Cake-O-Rama, on Mason Street in Fort Collins, Colorado, to driving buses for Poudre RE-1 and Transfort. Later, she started a large day care out of her home, Carousel Care-O-Rama, that met the needs of many working families over a period 20 years. She liked to travel and toured all 50 states and over 20 countries on 6 continents. On any day you might have found her in a gondola in Venice, walking the Great Wall of China, visiting Checkpoint Charlie, climbing the stairs of the Leaning Tower of Piza, shopping the souk in Marrakesh or Rabat, holding a Koala in Australia, on a safari in the Serengeti, atop the Eiffel Tower, touring the hills of Scotland, watching the world’s largest geyser in Iceland, or crossing through the Panama Canal. Leona was preceded by death by her parents, Kenneth and Wanda Pelren, a son Barry Rittenhouse, brother Leslie Pelren, and a great grandson Landon Rittenhouse. She is survived by her husband Larry Rittenhouse, sister Nadine (Pelren) Owensby, brother-in-law Phil Owensby, brother Bryce Pelren, sister-in-law Bonnie Pelren, son Vince Rittenhouse and wife Penny, daughter Colleen Harris and husband Dave, daughter Cami Lopez, and 12 Grandchildren - Paige (Rittenhouse) Farmer and husband Chris, Ashton Harris, Cody Rodriguez, Kyler Harris, Megan (Rittenhouse) Winter and husband Jarrod, their children Zayden and Myla, Jaynae Rodriguez, Courtney Harris, Amber Lopez, Hailey Lopez, Jaiden Lopez, Hannah Harris, and Sierra Lopez. She will be greatly missed by a host of aunts, uncles, cousins, nephews, and nieces. A viewing will be held at Goes Funeral Care, 3665 Canal Drive, Fort Collins, CO, on April 3, 2018 from 4:00 pm to 6:00 pm. A celebration of her life will be held at Foundations Church, 1380 Denver Avenue, Loveland, CO, at 3:00 pm on April 5, 2018. Memorials in Leona's name might include St Jude, www.stjude.org, PVHS/MCR Foundation for Brain Cancer (PO Box 1624, Fort Collins, CO 80522-9801), or, the charitable organization of your choice. Donations can be sent direct or mailed to Goes Funeral Care including, intended for a Leona Rittenhouse memorial, and the name and address of the charitable organization.

Heaven gained a beautiful and laughing soul as Leona Rittenhouse (75) joined her Savior and was lifted to everlasting peace on March 26, 2018, following a short challenge from brain cancer. Leona was born in Chadron, Nebraska, August 17, 1942.... View Obituary & Service Information

The family of Leona Marie Rittenhouse created this Life Tributes page to make it easy to share your memories.

Heaven gained a beautiful and laughing soul as Leona Rittenhouse...