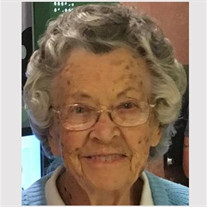 Leona A. (Wilmes) Schneider died Wednesday July 31, 2019, in Loveland, CO. Visitation at 9 am and Mass of Christian Burial will be celebrated at 10:30 am, August 5th, 2019, at St. Elizabeth Ann Seton Catholic Church, Fort Collins, CO. Interment will be at Fort Logan National Cemetery, Denver, CO, at 9 am Friday, August 9th. Leona was born September 30, 1919, in Glen Ullin, ND, to Peter and Theresa Wilmes. She grew up in Glen Ullin and on August 16, 1941, married Clarence Schneider in Snoqualmie Falls, WA. Following WWII, Leona and Clarence moved to Beulah, ND, and lived there until moving to Fort Collins, CO, in 2002. Clarence died shortly after the couples’ move to Fort Collins and Leona continued to live in Colorado with her daughter, Diane. Although she worked outside the home at times during her adult life, most of Leona’s work through 62 years of marriage was focused around providing a warm and happy home for her family. Until she was no longer able, Leona also enjoyed her church, music, golfing, square dancing, playing cards and board games, and traveling. But her greatest joy, always, was spending time with her family and her many friends. Leona is survived by two sons, Gary Schneider (Paula) of Asheville, NC, and Allen Schneider (Keri) of Phoenix, AZ; two daughters, Janet Osten (Murray) of Lake Crystal, MN, and Diane Schneider of Fort Collins, CO; a sister, Eileen Gerving (Jerome) of Glen Ullin, ND; a brother, John Wilmes, of Lake Havasu City, AZ; ten grandchildren; eleven great-grandchildren, and numerous nieces and nephews. She was preceded in death by her husband, Clarence, a daughter, Ione Frank, both her parents, five brothers, and three sisters. In lieu of flowers, please send a donation to Catholic Relief Services, P.O. Box 17090, Baltimore, MD 21297, 877-435-7277.

The family of Leona Agnes Schneider created this Life Tributes page to make it easy to share your memories.