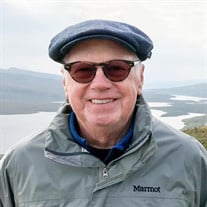 Len Albright, PhD, was a kind and compassionate father, grandfather, and Professor Emeritus of the Colorado State University. He passed away at the age of 73 on Tuesday, February 23rd, 2021 in the arms of his beloved son, Daniel Albright. Len was born July 1st, 1947 in Pittsburgh to Leonard Sr. (Ogden) and Edith (Brawdy) Albright. He grew up in West Newton, PA, where his parents operated a feed mill. He had two older sisters, Norma and Nancy. Len’s mother died when he was still in school, and he lost his father in his early twenties. He may not have graduated high school if it wasn’t for the tough love from his stepmother, Alice (Bair), a cultured and well-traveled educator who married Ogden some years after Edith’s death. As a teenager, Lenny fell in love with bowling, competing for cash at tri-state area tournaments. He might have tried to make a living as a bowler or a baseball player (he tried out for second base with the Pittsburgh Pirates), but Alice convinced him to attend Findlay College, which he later described as the best thing he ever did. Pumping gas to pay for school, he eventually became student body president. As a Vietnam War objector, Len opted to take an essential civilian job, teaching children with special needs in Maumee, OH public schools. He pursued his master’s at Bowling Green State University on scholarship, married his first wife, Star (Haid), and had two children, Kristin and Stephen. Len received his PhD from the University of Illinois Urbana-Champaign, writing his dissertation on vocational education for students with disabilities. In the 80s and 90s, Len taught at Kent State, Rutgers, the University of Vermont, and CSU Long Beach. He was a prolific grant writer, working with the U.S. Department of Education and National Science Foundation on a wide range of research and evaluation projects in education. Len married his third wife, Lynn (DiLorenzo) Safarik, PhD, in 1992. They lived in Orange County, CA with their son Daniel and his stepchildren, William and Jillian. They moved to Fort Collins in 2000, where they were faculty members at CSU, and later to Denver, where Len worked as a consultant until his retirement in 2014. Lynn and Len lived in Boulder and then Longmont until their divorce in 2017. Len will be remembered as an upbeat and sensitive man with a great sense of humor, a proud Democrat, and a champion of public education. He loved doo-wop, R&B, James Brown, the music of Woodstock, and ‘90s slow jams. He bowled as long as he was able to, captaining “The Lebowskis” at the CSU league for nearly 20 years. He brought light and levity everywhere he went. Len is preceded in death by his parents, stepmother, sisters Norma (Rossetti) and Nancy (Barbera), and stepson William (Billy) Safarik. He is survived by his four children and their partners: Daniel Albright (Kirsten Dozier), Kristin Albright (Rey Hernandez), Stephen Albright (Kimberly Albright) and Jillian Safarik (Kirtus Fleeman); grandchildren Aubrey and Parker; ex-wives Star Albright, Sylvia Craig, and Lynn DiLorenzo; and will be lovingly remembered by his family, oldest and best friend Brian Cobb, and many other dear friends, colleagues, and students. A celebration of life will be held in Cobb’s backyard when it is safe to gather, tentatively early August. Those who knew Len are encouraged to RSVP by contacting [email protected] When the date is established you will receive an email with specific date, time, and address information.

Len Albright, PhD, was a kind and compassionate father, grandfather, and Professor Emeritus of the Colorado State University. He passed away at the age of 73 on Tuesday, February 23rd, 2021 in the arms of his beloved son, Daniel Albright. Len... View Obituary & Service Information

The family of Leonard Ogden Albright created this Life Tributes page to make it easy to share your memories.

Len Albright, PhD, was a kind and compassionate father, grandfather,...