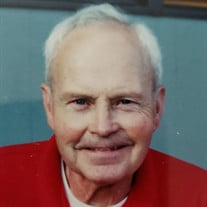 Leroy (Roy) L. Peterson left our world on September 26, 2020. Born 95 years ago in Omaha, NE. He was the 2nd child of Lillian and Louis Peterson. Roy graduated from North High School and following his graduation in 1943, he enlisted with the US Army. Assigned to the 882 Field Artillery Battalion, he earned the title of Section Leader and the rank of Corporal. During his service as a Supply Clerk, he received the WWII Victory Medal, American Campaign Medal along with several awards to include Expert S Carbine, Riffle Expert and Cannoneer. Holding various jobs in his younger years, he retired from Coors Brewery where he worked as an Industrial Millwright for 20 years. Along with his wife, their real loves were garage/estate sales, their various collections of buttons, rocks, etc., and they especially loved visiting the gambling casinos in Blackhawk and Central City. At one point, I believe they had one of the largest button collections in the US. When Roy was unable to care for himself and his wife, John moved them from the Denver area to live with Jan and him in Fort Collins, CO. After 55 years of marriage, Roy was able to be at Juannelle’s bedside when she passed away. Roy is survived by his twin children, Jan Hutson and John Peterson. His granddaughter Catharine Parker (Russell Parker), great grandchildren Sierra, identical twins, Rhea and Iris. Granddaughter Jamie Peterson and grandson Kelly Jackson. He is also survived by his step-daughter, Shawna Bleigh and her daughter, Tianna Leinhos. His niece, Nancy (John) Fusie, great nephew Brandon and great niece Rene. Cousins Gloria Harvey and Geri Foreman (all 3 born the same year). He had a special place in his heart for Juannelle’s relatives Tim Palermo, Trina Palermo and Steva Goree along with their families. And so many meaningful friends, to especially include Martha & Barry Spindler, Harriet & Marv Brittenham and members of the Colorado Button Society. Roy was preceded in death by his wife, Juannelle , his son Ted Jackson and his beloved sister, Dorothy Brubaker. He did not want any services following his death, but he would invite you to have a Coors beer in his memory. He retained his wit, humor and stubbornness until the final week of his life. The family is especially grateful to the care he received following his broken hip at Brookdale Assisted Living in Fort Collins and to Suncrest Hospice who made his final days comfortable and allowed him to die with dignity. In lieu of flowers, a donation to Suncrest Hospice would be deeply appreciated.

Leroy (Roy) L. Peterson left our world on September 26, 2020. Born 95 years ago in Omaha, NE. He was the 2nd child of Lillian and Louis Peterson. Roy graduated from North High School and following his graduation in 1943, he enlisted with the... View Obituary & Service Information

The family of Leroy L. Peterson created this Life Tributes page to make it easy to share your memories.