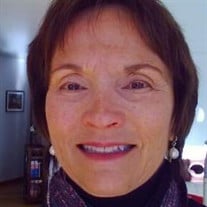 Linda Lee Knowlton died on April 19, 2021, after a valiant two-year fight with breast cancer. She spent her final days at her long-time home in Fort Collins, CO, surrounded by those who love her. Linda was a wonderful mother and best friend to her daughter, Natalie. She inspired her daughter to think for herself, to be her best in this life, and to make a meaningful impact on her community. Natalie is dedicated to carrying forward Linda’s legacy and commitment to our environment and the creatures that live in it. Linda was born in Pennsylvania Dutch County. She and her younger sister Annette (“Annie”) were small town girls, a feeling she identified with throughout her life and that eventually inspired her to make Fort Collins her home. She was a life-long learner and a fiercely independent thinker, always in search of what was just and truthful. As her high school’s valedictorian, she went on to graduate from Pennsylvania State University with a BA in Foreign Service and a concentration in the Soviet Union. She then received her Masters of Liberal Studies from Georgetown University. Throughout her life she continued to seek out opportunities to learn, studying languages (French, German, and Latin) and taking countless courses in history and the arts. Linda was a regular at Colorado State University’s Osher Institute for Lifelong Learning programs on world affairs, and she spent a semester there facilitating an international current events roundtable. All her life she was a voracious and intellectual reader. Linda was a dedicated civil servant. Out of college, she went to work for the US Census Bureau as the first non-industrial engineer ever hired by the Bureau to do performance standards for employees in repetitive jobs. She worked for the Navy’s Officer in Charge of Construction, Army Financial Management Command, and Army Information Systems Engineering Command before joining the US Forest Service (USDA), where she stayed for more than 20 years and which brought her to Fort Collins in 1994. Linda was a world traveler and lover of nature. She spent a year living in Bangkok, Thailand, and her travels took her: across Western, Central, and Eastern Europe; throughout East, South, Southeast, and Western Asia; to East and North Africa; and skiing in South America. Linda loved the mountains and was an avid hiker, skier, and snowshoer. Her soul lived out in the open space, and she found peace deep in the forests. Linda was a leader in her community, was an advocate for animals and the environment, and influenced her friends and others to make a difference. She served on the Larimer County Library Board, the Larimer County Parks Advisory Board (including as chair for several years), and the City of Fort Collins’ Land Conservation and Stewardship Board. She was also a Court Appointed Special Advocate. Linda was an early and enthusiastic member of Poudre Wilderness Volunteers, becoming the first woman to chair the organization. During winter months she was a dedicated Cameron Pass Nordic Ranger for the US Forest Service. More recently she was a volunteer with the Behavior and Enrichment Volunteer Program at the Larimer Humane Society. She loved cats, big and small, and made it her mission to support the Larimer Humane Society and the Wild Animal Sanctuary. There will be an informal gathering for friends and family later in the summer. Linda’s family is welcoming donations to the Wild Animal Sanctuary—a great love of hers. Please visit https://tinyurl.com/udd8zp8h to make a donation in her memory (and please note in the Special Instructions field "In Memory of Linda Knowlton").

Linda Lee Knowlton died on April 19, 2021, after a valiant two-year fight with breast cancer. She spent her final days at her long-time home in Fort Collins, CO, surrounded by those who love her. Linda was a wonderful mother and best friend... View Obituary & Service Information

The family of Linda Lee Knowlton created this Life Tributes page to make it easy to share your memories.