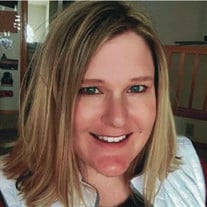 Lisa Helene Redmond 41 of Windsor, Colorado died at home, Tuesday, May 30, 2017 surrounded by her loving family. She was born on January 8, 1976 to James Virgil and Judy Lorene Reiss in Grand Island, Nebraska. Lisa and her brother, Nick grew up together in Grand Island and in 1994, she graduated from NW High School. Lisa pursued and graduated cum laude with a degree in Psychology from NW Missouri State. She worked at the Boys Town Hospital and Boys Town during which she trained personnel in parenting techniques. Later, she moved to Colorado and began her career as a case worker in Weld County. Lisa was devoted to helping and touching so many young lives that she cared so deeply about. Lisa loved to travel and visited Sweden, Australia and Germany. She was a wonderful vocalist and enjoyed singing while her husband, Jeremy played the guitar. Lisa married Jeremy Redmond in 2007 and they were blessed with two children, Cooper, age seven years old and Norah, age five years old. After eleven years, she retired to earn a master’s degree and be a full-time mother. Lisa loved being a wife and mother more than anything. Shortly upon starting this new journey, Lisa was diagnosed with malignant melanoma, which she battled for fourteen months and fought so valiantly. Her husband, Jeremy tenderly cared for her at home throughout the duration of her illness. Lisa is survived by her husband, Jeremy Redmond; son, Cooper and daughter, Norah of Windsor, Colorado; mother, Judy Reiss of Grand Island, Nebraska; brother, Nick, (Amy) Reiss and their son’s, Lisa’s nephews, Jack and Sam; uncle, Art and aunt, Jan Krueger of Windsor, Colorado, who diligently supported Lisa during her battle. She is also survived by Jeremy’s father, David; mother, Christl and brother, Jason Redmond. Lisa will also be missed by her much loved cousins, Katie Northern, Shane Krueger and Kris O’Neill and their children; aunt, Fran Reiss of Kansas and her family and aunt, Ginger See and her family. Lisa is preceded in death by her father, Dr. James Reiss; and uncle, Jerrel Reiss. A Celebration of Life is scheduled for 7:00 PM, Saturday, June 10th at Bethel Lutheran Church, 328 Walnut Street, Windsor, Colorado; Reception to follow the service in the church courtyard. In lieu of flowers, please consider making a donation in Lisa’s memory to Jeremy Redmond c/o Goes Funeral Care & Crematory, Inc., 3665 Canal Drive, #E, Fort Collins, Colorado 80524.

Lisa Helene Redmond 41 of Windsor, Colorado died at home, Tuesday, May 30, 2017 surrounded by her loving family. She was born on January 8, 1976 to James Virgil and Judy Lorene Reiss in Grand Island, Nebraska. Lisa and her brother, Nick grew... View Obituary & Service Information

The family of Lisa Helene Redmond created this Life Tributes page to make it easy to share your memories.