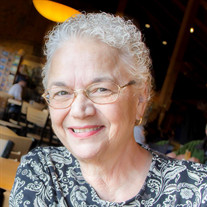 After a long and gallant battle fighting cancer, Lorraine Anne Moe went to heaven to be with our Lord on October 1, 2017 at the age of 68. Lorraine was raised in New Jersey and lived in California before making Fort Collins home these past 24 years. She met the love of her life, Ray A. Moe, in 1975. They were engaged on top of the Eiffel Tower in 1977, married in 1983, and have been as one ever since. Ray always affectionately referred to Lorraine by her nickname “Apples”. Lorraine had one son, Maxwell C. Moe, an astrophysicist who now resides in Tucson. Max is married to Miranda, and they have a two-year-old son, Malachi Regulus Moe. Malachi named Lorraine “GaGa”, a title she wore with great pride. Lorraine always cared for others more than herself. Everyone knew her by her friendly smile, contagious laugh, and helping hand. Lorraine continually made God and family a priority in her life. During her twenties and thirties, Lorraine worked in administration for oil and gas, pharmaceuticals, and personnel industries. Her best and favorite job was when she became a stay-at-home mom with her son. She became a common fixture at Heritage Christian School, where she organized field trips, drove student athletes, and helped teachers. When Max went to college, her replacement for him was her baby girl dog, Koko. Then she added Paco, and finally Chico. They were three of her very best friends. Lorraine loved family road trips, and she saw two hundred national parks and monuments while visiting friends and family. She really enjoyed the upgrade to an RV and the ability to travel for months, especially the past two winters when visiting her son, daughter-in-law, and grandson in Tucson. Lorraine was a fantastic chef. She had many special recipes, but the best was her famous homemade spaghetti sauce she learned as a child by watching her great-grandmother. Her three-day spaghetti sauce with sausage, meatballs, and pork was to die for! Lorraine never lost her smile, delightful wit, sparkling laugh, or abundant love for her family. Her thoughts were of others through the end. She was a truly great person who will be sorely missed by her family and friends. At Lorraine’s request, there will be no service or viewing. In lieu of flowers, memorial contributions can be made to St. Jude Hospital.

After a long and gallant battle fighting cancer, Lorraine Anne Moe went to heaven to be with our Lord on October 1, 2017 at the age of 68. Lorraine was raised in New Jersey and lived in California before making Fort Collins home these past... View Obituary & Service Information

The family of Lorraine Anne Moe created this Life Tributes page to make it easy to share your memories.

After a long and gallant battle fighting cancer, Lorraine Anne...