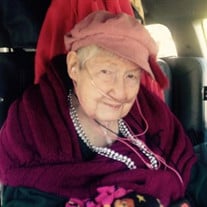 Beulah Louise “Lou” Stitzel, 95, passed away on June 9, 2016, from age-related health problems at the Golden Peaks Center in Fort Collins, Colorado. Louise was born on December 31, 1920 to Wayne Easterday and Beulah Illinois (Swaney) Easterday in Abilene, Kansas. The younger Beulah went by Lou or Louise because she had the same first name as her mother. She liked to joke that she and Ike made the town of Abilene famous. Lou studied Drama and Interpretation at Midland University in Fremont, Nebraska, graduating in 1944. She then worked on war-related housing projects in Washington, DC, and Charleston, North Carolina. Later, she worked on a church-supported housing project in Wichita, Kansas. She said, however, that working for the church project was a bit like living in a goldfish bowl when you were a single gal, so she decided to go to Northwestern University in Evanston, Illinois, to pursue her Masters degree so that she could teach. In Evanston, a matchmaking friend introduced her to her future husband, James Arthur “Art” Stitzel. After graduating, Lou taught speech and drama at the Baptist Missionary Training School for Girls in Seguin, Texas. Then she and Jim decided to get married by a justice of the peace in Indiana in 1949. They worked and saved money for the next year so that they could have a big church wedding in 1950. The best man was a friend of Jim’s who was a Presbyterian minister. The ceremony was performed by a minister friend of Lou’s who had promised to perform her wedding ceremony for free. A third minister friend also attended. This presence of clergy must have blessed the marriage quite well, for Lou and Jim ended up being married for 52 years. Lacking money, however, they honeymooned by traveling throughout the Midwest to indulge Jim’s love of seeing and photographing steam trains and trolley cars. While Jim completed his PhD in speech in the early 1950s, the couple worked during the summers at the Hermann Youth Ranches in Woodland Park, Colorado. Jim worked at the Silver Spur Ranch for boys, while Lou taught drama at the Quarter Circle H Ranch for girls, where the campers put on a play every summer. They even spent one Christmas at the Silver Spur, managing the beautiful ranch in the quiet of winter while the owners were traveling. In the summer of 1953, while touring the nearby Cripple Creek mining district, Jim and Lou saw a for sale sign in the window of the former Midland Terminal Railway station in Victor, Colorado. They ended up buying the building for a mere $1,500.00 This led to the couple’s resolve to return to Colorado permanently if they could. During the following years, Jim took various teaching jobs in Illinois and Michigan. Jim and Lou’s first son, David was born while Jim taught at the General Motors Institute (now Kettering University) in Flint, Michigan. Another teaching position moved them to Michigan State University in East Lansing where their other son, Kendal, was born. Finally, in 1960, the couple realized their dream of returning to Colorado when Jim became a professor at Colorado State University. During the mid-1960s, Lou taught at the CSU Theater Department and worked with local theater groups such as Fort Collins Children’s Theater, and CSU’s Opera Program. Eventually leaving the university, Lou remained involved with community theater, working intensely on outdoor summer musical productions for Helen Mary Green Theatre in Fort Collins. In the early 1970s, however, Lou felt a calling to do something different with her life. She worked for a while at the Volunteer Clearinghouse, (now the Education and Life Training Center), a non-profit assistance center in Fort Collins. Then, drawing on her work experience with housing programs, she helped found Neighbor to Neighbor, a non-profit low-income housing and resource center that still serves Larimer County. Eventually leaving Neighbor to Neighbor in the early 1980s, Lou founded her own housing assistance service, The Resource Assistance Center or TRAC, which successfully completed several small-scale low-income housing projects. Lou retired after the death of her husband in 2001. However, she remained a tireless advocate for low income housing causes and often spoke out at city council meetings. One family friend joked that he worried when he didn’t see her name in the paper. Lou was a member of Trinity Lutheran Church for most of her life in Fort Collins and was active in various prayer groups both at Trinity and at St. Luke’s Episcopal Church. Always warm and kind and interested in helping with the lives and problems of others, she was famous for saying prayers for anyone who she thought needed them, impressing even some otherwise very skeptical friends with her strong faith, beautiful prayers, and goodness of heart. A breast cancer survivor, she aspired to live as long as her mother, who had died at age 107. As Lou faced the onset of many age-related health problems during her final years, she seemed genuinely puzzled that she couldn’t keep going strongly toward whatever goal she chose. She was fond of saying that she was like an old car: she had some scrapes and dings; but as long as she could get a dented fender banged out, she could keep going. She lived at the Golden Peaks Center for the last three years of her life, where she routinely took part in as many activities as she could and had many friends. Lou was preceded in death by her husband Jim, and her brothers, Donald Easterday and Harold Easterday. She is survived by: her sons, David and Kendal (Robin), both of Fort Collins; and three grandchildren, Caleb, Margaret, and Tierney. She will also be missed by numerous friends and extended family including her dear sister-in-law, Helen Rinke-Ruschmeyer; beloved nephews and nieces Rick Easterday, Jan Keith, Joan Meissenberg, Kathy Wright, Carol Robb, Kirk Easterday, Margaret Kastens, Bonnie Easterday; and first cousin Charlotte Briber. A memorial service will take place at Trinity Lutheran Church, 300 E. Stuart, Fort Collins, on Saturday, July 2nd at 2:00 PM.

The family of Lou Stitzel created this Life Tributes page to make it easy to share your memories.