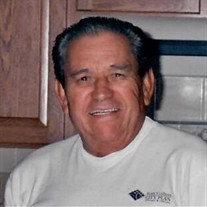 Louis Vincent Cordova,our loving, Dad, grandfather, great grandfather was born July 16, 1933 on a farm just east of Fort Collins. He married Jennie Caravas on August 2, 1958 in Fort Collins Colorado. They were married for 60 years! Louis was baptized as one of Jehovah’s Witnesses on June 11, 1994. Louis was very family oriented. He loved to have family around, and had very fond memories of his children, grandchildren and great grandchildren, especially of each one’s early years. He welcomed all of those that married into the family as his own. These just adding to his joy. He will be remembered as a good man, a gentleman, perhaps from times past. He was very loving and kind, being considerate and thoughtful of others. He was always a sharp dresser. Louis will be remembered for his beautiful gardens he had in his back yard. Not just beautiful but it seemed he had a “green thumb”. Their yard always had a plethora of flowers as well. He was an excellent cook, often having family over to share a meal. He also is known for his homemade spicy salsa! Many family members have tried to have him show them how he did it. It just never seems to come out the same. To Louis it was pretty special that all of his children, grandchildren and great grandchildren share his faith in serving the God of the Bible, Jehovah. Some of his last words to family was, “Don’t ever leave the Truth!” Family was important to him. His hope, and the hope of his family and friends is to see him as well as Jennie again when all is new. When as Jehovah promises, there will be a resurrection, to life right here on earth. It was very much a reality to Louis. Dad, Grandpa said he looks forward to much, much better times ahead. Louis’ children were with him as he battled to the end. The family is grateful for all of the letters, texts, messages, visits, thoughts and prayers from friends, family, and others that they have received. Death is an enemy of us all and it hurts deeply. The God of Comfort, Jehovah holds out hope for the future and Louis’ family, more than ever, view this as a blessing now and look forward to being reunited with this Good Man. He was preceded in death by his wife of 60 years, Jennie (Miss Jennie). He is survived by two sisters, Ermalinda Vargas and Esther Traylor. Children: Daughter: Karen Tharp and husband Dan Daughter: Melissa Visnic and husband Jason Son: Louis Cordova Jr. and wife Anita Grandchildren: Brody Visnic, Tony & Ashley Tharp, Lindsey & Reuben Gillette, Kristopher & Angie Tharp, Kelsey & Trevor Brown Great grandchildren: Jaxton and Peyton Brown Louis fell asleep in death on Monday, January 27, 2020 in Fort Collins Colorado. Memorial service to be held at: Kingdom Hall of Jehovah’s Witnesses, 2217 W. Vine Dr., Fort Collins, CO at 10:00 a.m. on Saturday, February 22, 2020. Reception to follow at the Fort Collins Senior Center, 1200 Raintree Dr, Fort Collins CO.

The family of Louis Vincent Cordova created this Life Tributes page to make it easy to share your memories.