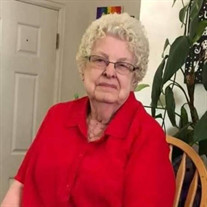 Louise Joanne Ahnstedt, 90, of Loveland, Colorado, passed peacefully from this life on November 1, 2021 with her family by her side. Louise was born in Three Oaks, Michigan on October 16, 1931 to parents John and Elizabeth Gearhart. She was one of ten children, raised in a small, one-stoplight town. After marrying, Louise and her first husband moved to New York. They had five children together, then in 1967 the family moved to Colorado. Louise was a loving mother and worked at Hewlett Packard in Loveland, while raising her children. While working at HP, Louise met her second husband, Cecil Ahnstedt and they were married in 1975. Louise welcomed Cecil’s children into the family and loved them as she loved her own children. In 1983, they added another child to the family, adopting Barb at the age of 13. Family always came first in Louise’s life. She had enough love to share with all 8 of her children, and the grandchildren who followed. She made it a point to spend time with each of them individually, taking them on outings, hosting them for sleep-overs and taking them on vacations. She was very involved in Special Olympics and in 1989 she and Cecil were inducted into the Special Olympics Hall of Fame. Louise was a self-less, generous, and strong-willed woman. She had a great sense of humor and loved to joke. She was known to visit a casino or two in her day, playing the slot machines in Blackhawk or any casino nearby during a family reunion. In October, Louise celebrated her 90th birthday, with all of her family near to share the joyful day. Louise’s family totals over 80 in all. She is survived by her husband, Cecil Ahnstedt; children, Linda Griffith, Robert (Kandy) Aitchison, Donald (Kay) Aitchison, Barb Ahnstedt, Alvin (Carol) Ahnstedt, Terry (Denny) Ahnstedt; 20 grandchildren; 38 great-grandchildren; and 9 great-great-grandchildren. She was preceded in death by her sons, Michael Aitchison and Mark Aitchison, and son-in-law, Daniel Griffith. A Memorial Service will be held at 1:00pm on Monday, November 8, 2021 at Lifespring Covenant Church in Loveland, CO (743 S Dotsero Dr, Loveland, CO 80537) with Pastor Scott Slayback conducting the service.

Louise Joanne Ahnstedt, 90, of Loveland, Colorado, passed peacefully from this life on November 1, 2021 with her family by her side. Louise was born in Three Oaks, Michigan on October 16, 1931 to parents John and Elizabeth Gearhart. She was... View Obituary & Service Information

The family of Louise Ahnstedt created this Life Tributes page to make it easy to share your memories.