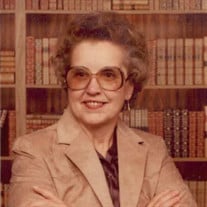 Luella “Mickey” Mae Lofink, 85, of Fort Collins, passed away peacefully Friday, March 2, 2018. Mickey was born on April 14, 1932 in Lincoln, Nebraska to parents Clarence and Esther. Born and raised in Lincoln, it was there she met and married Adam Lofink in 1947. Mickey and Adam had one son, Jim Lofink and the family moved to Colorado together in 1978. An artist at heart, Mickey’s hands were always moving. Her mastery of arts and crafts included needlework, quilting, cross-stitch, and oil painting. She was the self-employed owner of a ceramics studio, but her energy didn’t stop there. While living in Red Feather Lakes, she was active at the Chapel in the Pines, helping to line up preachers there for years. Mickey was a loving mother, wife, and grandmother, always busy and devoted to others. She is survived by her son Jim (Diana) Lofink, granddaughter Kim Lofink, one niece and three nephews. She was preceded in death by her husband Adam Lofink and her brother Lloyd Cox. Memorial service will be held at 2:00 pm, Saturday, March 10 at Goes Funeral Care, 3665 Canal Dr. Suite E, Fort Collins, CO 80524. Military burial service for the ashes of Mickey and her husband Adam will take place at Resthaven Memorial Gardens the following week.

The family of Luella Mae Lofink created this Life Tributes page to make it easy to share your memories.