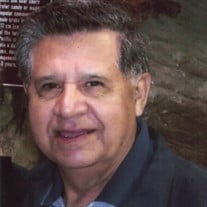 Luis Ernesto Flores died February 15, 2021 at his home in Fort Collins, Colorado at the age of 85 due to cardiac disease. He was born in Quiche, Guatemala on March 21, 1935. His parents, Ernesto and Marina, primarily lived and raised their family in the capital, Ciudad Guatemala where they raised three daughters: Refy, Lupita, Connie, and two sons: Leonardo and Luis. In his high school years, Luis came to Oklahoma as an exchange student and then attended college in Stillwater. It was during this time that Luis met and fell in love with Virginia Hyden, and a year later they married and subsequently they became parents to a daughter, Carol Sue. Shortly after her birth the young couple returned to make their home in the highland town of Quiche, Guatemala where over the next 10 years they became parents to Luis Alejandro, Patricia and Clifford. At the end of the decade, they decided to return to the Oklahoma for further education and to immerse their children in English. As changes in industry and economics occurred in Oklahoma, Luis and Virginia, moved their family to Fort Collins, Colorado where they began careers as property managers from which they retired after 35 years. During their time in Colorado, they celebrated the birth of four grandchildren: Nikki and Natasha from their daughter Patricia and Michelle and Kelly from their son Luis. The four granddaughters are grown pursuing careers and raising their families, and through them Luis and Virginia are blessed with 6 great-grandsons and 2 great-granddaughters with a 9th expected in July. Their daughter Carol and son Luis live and work in Cheyenne, Wyoming, their daughter Patricia lives in Fort Collins and their son Clifford works and lives in San Francisco. His family remembers Luis as a loving, caring person, at peace with God who loved family gatherings, college football (especially the Oklahoma Sooners), good food, and big band music; was frugal but generous when individuals were pursuing educational goals, interested in politics and its effects around world, and was a life-long learner.

Luis Ernesto Flores died February 15, 2021 at his home in Fort Collins, Colorado at the age of 85 due to cardiac disease. He was born in Quiche, Guatemala on March 21, 1935. His parents, Ernesto and Marina, primarily lived and raised their... View Obituary & Service Information

The family of Luis Flores created this Life Tributes page to make it easy to share your memories.