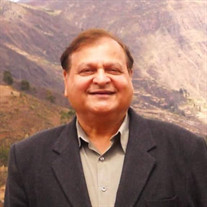 Mandar Balakrishna Sunthankar, 75, passed away at his home in Fort Collins, CO on Monday the 9th of November, 2020. Mandar was born on December 24th, 1944 in Belgaum, Maharashtra, India, to historian and revolutionary, Balakrishna Sunthankar, and his wife Kusum. He is the second of two sons, and grew up in Belgaum with his older brother, Avinash, attending primary school after the revolution in 1947. A self-proclaimed “good but lazy” student, Mandar finished primary school and attended College of Engineering, Pune, Maharashtra, where he earned his B.S. in Electrical Engineering in 1969. In 1971 he was accepted by University of Connecticut to study at Storrs, where he earned his master’s degree. That year, Mandar also married his long-time love, Shivalini “Lena” Sabnis who joined him in Connecticut in 1972. In 1973, they had their first child, their son Sumit, followed by a daughter, Shilpa, in 1976. After Mandar’s graduation, they moved to Broomfield, CO, where Mandar worked with technology manufacturing company NCR. In 1981, the family moved to Fort Collins to settle down, and Lena started her own medical practice, Alpine Family Care. After several years at NCR, Mandar ventured into his own business and started the accoladed Ionedge Corporation, which focused at first on superconductors. Eventually, Mandar developed other technologies, including a patented environmentally safe process and equipment for metal coating. He is a specialist in the engineering field in developing scientific process for businesses, and after selling his company, he became a consultant for businesses applying for government grants and integrating process into engineering-based workplaces. Mandar lived an active life to the fullest, embracing the Colorado lifestyle, whether making merry with family and friends, traveling with Lena to exciting locations like Peru or Turkey, or taking simple weekly rides on the old bike Sumit left behind in the garage. As Hindus, and having been active members of the Colorado State University India Association, Mandar and Lena often welcomed foreign students or Indian families from out of town to enjoy Thanksgiving in the warmth of their home, and for many years hosted popular, festive Hindu holidays like Ganesh Pooja for the Fort Collins community. They were key organizers in bringing together the Indian Community in Northern Colorado. Mandar is described by those who love him as young at heart, vibrant, and fun, someone who rarely let life get him down. He was a voice of reason, and active planner for the future, but also someone unafraid of trying something new and having a blast doing it- hearing new music, trying a new dish, going to a new place, starting an innovative business venture. He loved dancing to a song with a good beat, doing something that his children’s friends to this day still call, “The Mandar.” He will be sorely missed by his large circle of friends and family across the globe, and is survived by his wife, brother, both children and their spouses, and their King Charles Spaniel, Milli. A Celebration of Life will be planned for the spring.

The family of Mandar Sunthankar created this Life Tributes page to make it easy to share your memories.

Mandar Balakrishna Sunthankar, 75, passed away at his home in...