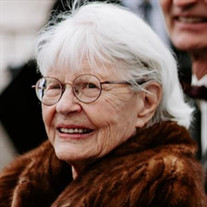 Margaret N. Caldwell was a loving, generous, and loyal wife, mother, grandmother and friend. She left this world surrounded by family on February 11, 2022 at age 97. She is survived by children David and Ellen Caldwell, Christine and Tim Keiper, Susan McCracken and grandchildren Jenna, Amy, Matthew Keiper, Leah McCracken, Kelly and Austin Hudspeth and Isaac and Lianna McCracken who are expecting Margaret’s first great grandson. She was preceded in death by her parents Vincent and Ramona, husband, Jack Caldwell, and son-in-law Kurt McCracken. Margaret was born and grew up in Milwaukee, Wisconsin, went to Colorado University in Boulder, CO and was a PE teacher in Denver where she met and married Jack Caldwell. They moved to Fort Morgan, CO where she loved raising her three children, opened her home to foster children, and became a successful business woman opening one of the first travel agencies in NE Colorado. After retiring, Margaret and Jack moved to Columbia, Missouri and then Las Cruces, NM. Margaret loved politics and wrote letters to the editor for local newspapers. She often wrote under the pen name Joy Nast at the request of her husband, who was wary of repercussions with friends. She kept a notebook of published letters and delighted in going back and reading them and the passionate responses they sometimes generated. After retirement she often faxed politicians in Washington late into the night. Margaret's favorite Bible verse was John 3:16 and she would open prayers with, "We thank thee Father for thy many blessings..." She valued a sermon rich with scripture and didn't have much good to say about one featuring quotes from Readers Digest. She highly valued her family’s Christian heritage. With age, Margaret became ever more sweet, loving and appreciative of friends and family. As a senior citizen she often delighted others with her sense of humor and ability to laugh at herself. Recently Margaret dreamt she died and reported, “I couldn't remember my life or who I was.” When asked how that felt she replied, chuckling, “Normal! I can't remember anything anyway!” After being told by the hospice doctor that she probably had just a few short months to live she quipped, "Before I die, I need to go to the bathroom." "Please bring me some candy. That's my final request." Margaret loved music, especially jazz and classical. She asked that Aaron Copeland’s “Fanfare for the Common Man” be played at her funeral saying, “That would open up the gates of heaven for me. ‘Knock, knock! I’m here! Ready or not!’” A celebration of Margaret’s life, featuring “Fanfare for the Common Man,” will be held at 11:00 am on February 22, 2022 in Evans Memorial Chapel, Denver, CO. This will be followed by a lunch reception at the Brown Palace Hotel where Jack and Margaret had their wedding reception February 24, 1951, 71 years ago. In lieu of flowers, please donate to www.stepdenver.org or www.maasaischool121.org on her behalf.

Margaret N. Caldwell was a loving, generous, and loyal wife, mother, grandmother and friend. She left this world surrounded by family on February 11, 2022 at age 97. She is survived by children David and Ellen Caldwell, Christine and Tim Keiper,... View Obituary & Service Information

The family of Margaret Nast Caldwell created this Life Tributes page to make it easy to share your memories.

Margaret N. Caldwell was a loving, generous, and loyal wife,...