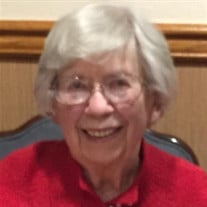 Margaret Holbrook Davis, 87 of Fort Collins, Colorado died August 21, 2016. She was born in Davenport, Iowa September 8, 1928 to Celas G. Holbrook and Margaret Tinsley Holbrook. Margaret moved from Davenport to Long Beach, CA as a senior in high school, where she was the editor of her high school newspaper and graduated as class valedictorian in 1946. Margaret attended the University of California at Berkeley majoring in English literature and working on the Daily Cal. Margaret met Donald C. Davis, a U.S. Coast Guard ensign stationed in Long Beach, while on Christmas vacation, and they were married August 9, 1947. Don promised her mother she would finish college and Margaret attended several colleges and raised three children, while they lived in 8 different states over the course of his thirty-year Coast Guard career. From Florida to Alaska, Massachusetts to California, North Carolina to Texas, she enjoyed furnishing and decorating many homes, and sang in many church choirs. Margaret finished college at the University of Corpus Christi in 1971 and then began a new career as a vocational counselor in Elizabeth City, North Carolina in 1972. After retirement, they built a beautiful home in Elizabeth City and spent what she called their “golden years” traveling and enjoying their home. After Don’s death in 2005 Margaret moved to Fort Collins and lived for 11 years at the Winslow, where she made many friends. She found her true passion at age 55 when she turned her lifelong love of fabric and talent for design and sewing to the art of quilting. She made wonderful friends in Elizabeth City and in Fort Collins through their mutual passion for art quilting. Traveling to quilt shows and classes with her friends was a focus for her life. She made beautiful quilts for all of her children and grandchildren, and donated many to Project Linus, and other charities. Margaret was a voracious reader, lover of choral music, opera and University of North Carolina basketball-Go Heels! She was a member of the Rocky Mountain Creative Quilters and the Silvertones. Her friends and family have benefitted from her calm intellect, creative spirit, skill at listening, and her example of accepting with equal grace the joys and challenges of life. She is survived by her children Hank (Nanci Newstrom) of Charleston, Illinois, Laura (Tom Peterson) of Fort Collins, and Mark (Beth Scherfee) of Georgetown, Kentucky, eight grandchildren and 3 great grandchildren, and many friends. She will be deeply missed. Gifts in her honor, in lieu of flowers, may be made to Project Self Sufficiency, Cann Memorial Presbyterian Church (Elizabeth City, NC) or Plymouth UCC (Fort Collins). There will be a memorial service at Plymouth Congregational Church, on Saturday, August 27th at 11:00 AM. Margaret’s remains will be interred after a private ceremony at Arlington National Cemetery alongside her husband, Capt. Donald C. Davis, USCG Retired.

The family of Margaret Holbrook Davis created this Life Tributes page to make it easy to share your memories.