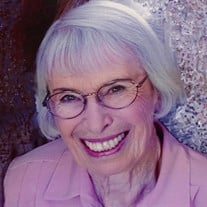 Marianne W. “Marian” Hershcopf August 3, 1925-April 1, 2017 Our beloved mother, Marianne W. Hershcopf, 91, passed away peacefully on April 1, 2017, from Alzheimer’s disease. Marian had a life full of love, overcame early challenges, and engaged the world with an attitude of optimism through action. She was a very special person who will remain in our hearts forever. Marian was born August 3, 1925 in Vienna, Austria, the daughter of Siegmund and Regina Weisz. From an early age, Marian was enthralled by the natural world and loved spending summers in the Austrian countryside. She was an excellent student who enjoyed reading and listening to classical music. Marian had a very happy childhood with her loving parents and older sister Lisl (Lee) until everything came crashing down when the Nazis invaded Austria in 1938. Marian’s mother managed to obtain visas for her daughters to travel to England aboard a “Kindertransport” train, but without their parents or a word of English. Marian attended boarding school; during school holidays she stayed with the Salters, two open-hearted sisters. Marian’s profound experience as a refugee dependent on the kindness of others gave her great empathy for anyone who suffered misfortune; compassion and generosity were hallmarks of her life. In 1943, Marian took a dangerous journey across the Atlantic to New York where her family was reunited. She attended Hunter College, graduating with honors in 1947. Over the summers Marian worked as an au pair for wonderful people who became like a “second family,” especially after her mother died when Marian was just 22. Marian attended graduate school at the University of Wisconsin-Madison, studied Botany and earned a doctorate in 1951, at a time when few women earned a Ph.D., let alone in science. There she met the love of her life, Richard Hershcopf; Marian found in Dick a kindred spirit who was equally committed to making the world more just, equitable and peaceful. They married on August 29, 1948, had three daughters, and remained happily married for 66 years until Dick’s death in 2015. Marian was a feminist and a working mom all her life. When the family moved to Gunnison, Colorado in 1961 Marian became the librarian at the Public Library, a job she relished. While raising her kids, Marian hosted many relatives and friends from around the world, engaged in local and world issues, and took glorious hikes and cross-country ski trips with a wonderful circle of friends. Marian moved to Fort Collins in 1968 and lived there for almost 50 years. She made life-long friends, and was active in addressing peace, social justice, and environmental issues. She volunteered with the Friends of the Library well into her 80’s. She worked for 17 years as the librarian at the Colorado Division of Wildlife, a position that combined her interest in science and commitment to public service. She retired as a valued colleague in 1989. A life-long learner, Marian took Front Range Forum classes, engaged in lively book group discussions, and remained open to new ideas. She and Dick visited family and friends across the U.S., Europe, Israel and Canada. They attended the symphony, jazz concerts, and local theatre. Marian could identify nearly every wildflower in the high country, and was an accomplished gardener who instilled her love of nature in all of us. We have fond memories of hundreds of hikes and picnics, birthday and holiday celebrations, flowers in our home and vegetables from the garden. Marian was a loving, fierce and protective mother who maintained a close relationship with each of her grown daughters. She was a role model of strength, intelligence, independence, vitality and love throughout her life. Marian was a true life-partner to Dick, and dearly loved her sons-in-law, her five granddaughters and their families. Marian taught us that the most important value in life was to be “a good person.” Marian was deeply loved and will be greatly missed by her daughters and sons-in-law, Jane and Andy Looney, Eve Hershcopf and Gregory Lewis, and Debra Hershcopf Kennedy and Harry Kennedy; by her granddaughters: Allison (Looney) Quijano and Chris Quijano and their children Maxwell and Catalina; Rachel Kennedy and fiancé Caitlin McShane; Gabrielle Kennedy; Laura and Nina Lewis; and by her beloved sister- and brother-in-law, Dorothy and Harry Goodman, several cousins, nieces, nephews and their children. Marian’s dear sister, Lee Zall, passed away on April 26. A private celebration of Marian’s life will be held in June. Marian’s family would like to thank all of the friends who brought joy to Marian with visits and cards, as well as the staff from Bloom at Home, Seniors Helping Seniors, Pathways Hospice, The Worthington, Morning Star, and Centre Ave. Rehab for their care and kindness. To honor Marian’s memory, please consider a contribution to the Women’s International League for Peace & Freedom (11 Arlington St., Boston, MA 02116, www.wilpf.org), Compassion & Choices (P.O. Box 101810, Denver, CO 80250, www.compassionandchoices.org), Poudre River Friends of the Library (301 E. Olive, Ft. Collins, CO 80524, www.prfol.org) or Pathways Hospice (7604 Carpenter Road, Ft. Collins, CO 80525, https://pathways-care.org).

The family of Marianne "Marian" W. Hershcopf created this Life Tributes page to make it easy to share your memories.