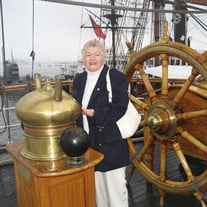 Marianne Wilhelmina Stiem, age 90, died peacefully on Friday, April 20, 2018 in Fort Collins, Colorado. Marianne and husband, Henry W. Stiem emigrated from Germany to Jamestown, North Dakota in 1955. After a few years, they moved to Hibbing, Minnesota where they raised their four children. When Henry passed away in August, 1996, Marianne moved into their cabin on Swan Lake where she lived as an independent and hardy woods woman for over 18 years. Her children, grandchildren and friends; her cruise ship journeys around the world; and her treasured Papillion dog “Furbie” were her greatest joys. Marianne loved to entertain and hosted many soirees in her little cabin’s “crow’s nest”. Marianne was a voracious reader and an accomplished historian of sailing ships and their famous captains. She was an authority on mariners of yesteryear who set out to discover new worlds. As a German World War II survivor and occupant of a Danish Prison Camp on the Island of Fanø, Marianne had many stories and life experiences to share, and those who met her quickly became her friends. Marianne worked very hard in her life and built a rich life with meager means. She was a woman of great strength, character and wit. Marianne is survived by her four children; Alexander Michael Stiem, Annette Ristina (Terry) Geiselman, Angelika Bennina (Lewis) Sotnick, Annemaria Katharina (Dale) Klobuchar; four grandchildren; Jacquelyn Geiselman, Nikole Geiselman, Philip Klobuchar, Brianna Sotnick; and daughter-in-law, Theresa Loscheider. The family has decided on a private burial, but wishes to thank all the kind, wonderful friends who loved and cared for Marianne. Online condolences can be left on www.goesfuneralcare.com. I am the albatross that awaits you at the end of the world. I am the forgotten soul of the dead mariners who passed Cape Horn from all the seas of the world. But they did not die in the furious waves. Today they soar on my wings towards eternity in the last crack of the Antarctic winds. -Sara Vial (Inscribed on a plaque at Cape Horn)

The family of Marianne W. Stiem created this Life Tributes page to make it easy to share your memories.