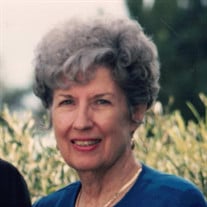 Marilyn Fryer, 97, long-time resident of Pomona, California, passed away at her daughter’s home in Boulder, Colorado on August 17, 2021. Marilyn was born in August of 1924 in Chicago Illinois to parents Erle and Fern Peterson. She graduated high school in Chicago and went on to earn her Associate Degree at North Park College. Marilyn stayed in Chicago, working in retail for some time. It was there she met and married Harlan Mansnerus before moving to Pomona, where their three children, Mark, Valerie, and Clayton, were born and raised. As Marilyn’s children got older and started school, she began work as a secretary at Claremont Colleges. She was a very fast typist and had impeccable grammar, which made her good at her job, where she worked until her retirement in 1993. Marilyn was remarried in 1971 to Robert Fryer and the two shared 30 wonderful years together. After Robert’s passing in 2001, she stayed in Pomona for some time, eventually deciding to move in with her son, Clayton. This was followed by a move in 2016 to her daughter, Valerie’s home in Boulder, Colorado. Early in her life, Marilyn developed a passion for reading. The first time her father took her to a library, she thought she was in heaven. She especially loved murder mysteries. She also enjoyed trips with Robert and their friends, traveling to Las Vegas regularly. Other past-times included jigsaw puzzles and watching Jeopardy, which she enjoyed until the end. Marilyn was loved by all who knew her. She was a true lady, sweet, polite to those around her, and honest. Most important, Marilyn was a very loving mother always. Marilyn is survived by her children, Mark Mansnerus, Valerie (Ben) Holmes, and Clayton (Ivonne) Mansnerus; grandchildren, Harrison Holmes, and Sherman Holmes. She was preceded in death by her husband, Robert Owen Fryer. Memorial donations may be made to the Humane Society. Marilyn loved her cats and made a monthly contribution to them.

Marilyn Fryer, 97, long-time resident of Pomona, California, passed away at her daughter&#8217;s home in Boulder, Colorado on August 17, 2021. Marilyn was born in August of 1924 in Chicago Illinois to parents Erle and Fern Peterson. She graduated... View Obituary & Service Information

The family of Marilyn Fryer created this Life Tributes page to make it easy to share your memories.