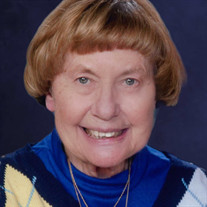 Marilyn Mae Olson was born on July 2, 1934 in the small Norwegian community of St. Olaf, Iowa. In those days, most babies were birthed at home where Marilyn was the first of six children born to Agnes and Gerhard Olson. When she was six years old her dad bought a 120 acre farm in the nearby farming town of Fayette where Marilyn spent her formative years. By the age of twelve she was driving a tractor or a team of horses, baling hay and de-tasseling corn to pitch in with the colossal planting and harvesting operations. At an early age she knew she wanted to become a nurse so after graduating from high school in 1952, she left the farm to attend Mercy School of Nursing in Dubuque, Iowa. She was first in her family to attend college and earned a degree as a registered nurse. It was there she met the man who would become her husband, George Kress. At the time, George was a football player for the University of Iowa. As Marilyn loved to tell to their children years later, she was with a group of nurse friends in a music hall when she first met George. One of Marilyn’s friends animatedly asked her, “Do you know who that is? He’s a big football player from Dubuque.” Two years after that chance encounter, the two were married. She continued her nursing career until the birth of her first child, Ann. A second daughter, Jane, was born in 1960. Marilyn resumed her nursing career in 1963 as a hospital nurse while George pursued his doctorate at the University of Iowa. During this time, son Dave was born. In 1967 George was offered a professorship at Colorado State University in Fort Collins, Colorado. Upon arrival in Fort Collins, Marilyn enrolled the kids in St. Joseph’s school where she became an active volunteer, initiating the annual Book Fair fundraiser for the school’s library. She was also one of the first volunteers for the Meals on Wheels program where she would even help clean the homes of those clients in particular need, do their grocery shopping, and listen compassionately to their life stories. Ever the nurse, she took it in stride when one of her elderly clients answered the door in nothing but his undershorts. Unphased, Marilyn delivered the day’s meal into the kitchen of the geriatric gentleman, who upon the next week’s visit, had no memory of his previous stage of undress. Marilyn took up tennis while in her early forties. She proved to be a fierce competitor when she and George won some City Doubles Tournaments. She was equally competitive when playing cards, be it bridge, cribbage, euchre, and even Old Maid. As she would trounce everyone else, she would claim it was due to skill and ability. A fourth child, Dan, was born in between tennis matches and card games. Marilyn’s life took a dramatic turn when she was unexpectedly stricken with a cerebral aneurism at the age of forty-nine. The condition proved permanently disabling, but over the next thirty-four years she retained her sense of humor, love of family, and devotion to her Catholic faith. The Legion of Mary welcomed Marilyn into their fold as a devotee of the Holy Mother. She was also a member of the Parish Nurses team at St. Joseph’s who are the Florence Nightingale’s of Fort Collins. It was her faith, her husband’s devotion and Iowa farmgirl pluck that saw her through her challenging debility. Marilyn died peacefully on Christmas Eve. She is survived by her husband George of 63 years, daughter Ann Kurronen (Jussi), Jane Kress, Dave Kress (Sheri) and Dan Kress. Her Olson siblings are Faye Bena (John), both deceased, Dennis Olson, Diane Mullins (Terry, deceased), Bonnie Olson and Ronald “Buzz” Olson (Jane). She had seven grandchildren and numerous nieces and nephews. The family wishes to thank all those who helped care for Marilyn these past few years, with special thanks to Antoinette Pike. In lieu of flowers, donations can be made to Meals on Wheels, St. Joseph School Library or the charity of one’s own choice. Private services will be held for the family and streamed online for all others who would like to take part as follows: Recitation of the Rosary at 1:30 pm followed by Memorial Mass at 2:00 pm, Tuesday, December 29, 2020. Follow either link below to join the service: https://www.youtube.com/channel/UCfTYqQ96sVNl3ED-UZFF0eA https://www.facebook.com/StJosephChurchFC/

Marilyn Mae Olson was born on July 2, 1934 in the small Norwegian community of St. Olaf, Iowa. In those days, most babies were birthed at home where Marilyn was the first of six children born to Agnes and Gerhard Olson. When she was six years... View Obituary & Service Information

The family of Marilyn Mae Kress created this Life Tributes page to make it easy to share your memories.