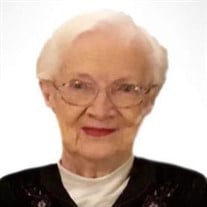 Marjorie Ann Madsen, 92, passed away peacefully on March 17, 2021, in Fort Collins, Colorado. Marge, as she was known, was born on a farm between Earling and Panama, Iowa to John and Elizabeth Smith. She attended one-room country schools before high school at Saint Mary’s in Portsmouth, Iowa. She graduated at age 16, left the farm and went to Harlan, Iowa to work. It was in Harlan that she met Ray Madsen, who had just returned from Japan after serving in WWII. They were married in 1948 at Saint Mary’s Church in Portsmouth and spent 65 years together before Ray’s death in 2013. They raised four daughters together in Harlan and later Nebraska City, Nebraska. After retirement Ray and Marge moved to Fort Collins, Colorado to be near family. Over the years Marge worked in bookkeeping and retail positions in addition to volunteering at the girls’ schools, at church, hospitals and with the Girl Scouts. In her later years she enjoyed making crafts that were sold, donated and given away to family and friends. Marge was preceded in death by her husband, Ray, her daughters, Jane Pereski and Mary Pichler, son-in-law Ken Pichler, grandson, John Pichler, brothers, Bill and Jack Smith and sister, Rita Schmitz. Left to cherish her memory are daughters, Betty Headley (Mike) of Houston, Texas and Jean Kreikemeier (Jim) of Fort Collins, Colorado, son-in-law, Mitch Pereski, grandchildren, Brian Headley, Christina Wendt, Allison Kreikemeier and Nathan Kreikemeier, and many nieces, nephews, friends and caregivers. A memorial mass to celebrate Marge’s life will be held at 10:00a.m. on Saturday, July 24th at Saint Elizabeth Ann Seton Catholic Church in Fort Collins, CO with Interment to follow at Roselawn Cemetery. Memorial contributions in her honor may be made to the cancer charity of your choice.

Marjorie Ann Madsen, 92, passed away peacefully on March 17, 2021, in Fort Collins, Colorado. Marge, as she was known, was born on a farm between Earling and Panama, Iowa to John and Elizabeth Smith. She attended one-room country schools... View Obituary & Service Information

The family of Marjorie Madsen created this Life Tributes page to make it easy to share your memories.