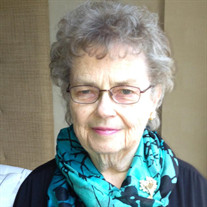 Marjorie J. “Peg” Harder, age 92, died Friday, August 14, 2020, in Fort Collins, Colorado, with family members at her side. Peg, daughter of Walter and Naomi (Jones) Price, was born on September 4, 1927, in Ithaca, New York. Peg’s family moved to Madison, Wisconsin, when she was a young child. She earned a bachelor’s degree in home economics in 1949 from the University of Wisconsin-Madison. She was married to Henry F. Harder on October 9, 1954, in Madison, and the couple lived in Manitowoc for 60 years. Early in her career, Peg taught home economics in Two Rivers Public Schools and served as the University of Wisconsin Extension home agent in Manitowoc County from 1954 to 1956. As was customary for the times, Peg “retired” when she and Henry were expecting their first child. She managed their household and cared for their three children, eventually returning to teaching adult sewing classes and working at various retail stores. In retirement, Peg volunteered for almost 25 years with the Manitowoc County Historical Society and its Pinecrest Historical Village, including serving five years as president of the society’s board of directors. Peg formed a small chorus with the society that performed several times a year for a decade. She helped develop a system of recording, cataloging, and storing artifacts and documents in the society’s research library collection. She took great pleasure in training volunteers and helping them match their talents to the organization’s needs. After Henry’s death in 2014, Peg moved to Colorado to be closer to family, and she lived independently until suffering a stroke in early August. Peg is survived by daughters: Cynthia (Bruce) Hagen of Columbus, Ohio, and Leland, Michigan; Karen Harder (Jeff Dean) of Fort Collins, Colorado; and son Bruce Harder (Ava Altman) of Waban, Massachusetts; six granddaughters: Lindsay (Joe) Ypma, Abigail (B.J.) Everson, Erin Dean, Rachel (Bryan) Hulse, Natalie Harder, and Rebecca Harder; and five great-grandchildren: Delilah, Genevieve, and Mabel Ypma and Harper and Dempsey Everson. Peg’s life will be celebrated with a private family gathering. Memorials in Peg’s name to Grace Congregational United Church of Christ in Two Rivers are appreciated.

The family of Marjorie "Peg" Jane Harder created this Life Tributes page to make it easy to share your memories.