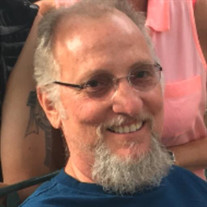 Mark Alan Raubach, 66, of Severance, Colorado passed away March 2,2019. He was born to parents Shirley Jean Hadeen and Frederick Raubach. Mark was the third of four children. He moved from South Dakota to Colorado in 1968. He graduated from Poudre High School in 1971, attended Denver community College from 1974-1975 and attended CSU, where he studied art from 1975-1977. In 1977 he dropped out of CSU and then learned the auto body trade. In 1985 Mark attended the Colorado Institute of Art and graduated in 1987 with an Associates Degree in Advertising Design. In 1979 he married Susie Priest and in 1988 they had a baby boy whom they named Dylan Jared Raubach. Mark liked hanging out with his brother Scott, fishing, riding motorcycles and whatever else interested him. He was a very talented artist and had a big interest in it since he was a little boy. Mark had many friends over the years and he was a true friend, helping any and all when help was needed. Mark was preceded in death by his grandparents, Hazel and Erwin, who also helped raise Mark and his siblings; his uncle Maurice and Aunt Joyce; his beloved brother Scott; and his niece, Kimberly. He is survived by his son Dylan and granddaughter Lily, his mother, brother Rick and sister-in-law Joyce, sister Barb and brother-in-law Steve, ex-wife Susie, three nieces and one nephew. This was written by Mark and he would also say that he is going to miss his friends, the art he created and his LP record and CD collections that he had amassed over the years, which started with his first album purchase of The St Peppers Album by the Beatles. Lastly, my son Dylan and granddaughter Lily, whom I love very much, will be missed by me the most. Adios to one and all. It was a good ride. Visitation and Viewing 5:00-7:00 pm, Wednesday, March 6, 2019 Goes Funeral Care & Crematory, Fort Collins To contribute to a memorial fund for Mark's family, please visit his Go Fund Me page at: https://www.gofundme.com/funeral-costs-for-mark-raubach?utm_source=facebook&utm_medium=social&utm_campaign=fb_co_campmgmt_m

Mark Alan Raubach, 66, of Severance, Colorado passed away March 2,2019. He was born to parents Shirley Jean Hadeen and Frederick Raubach. Mark was the third of four children. He moved from South Dakota to Colorado in 1968. He graduated from... View Obituary & Service Information

The family of Mark Alan Raubach created this Life Tributes page to make it easy to share your memories.