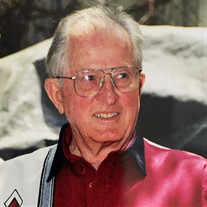 Marks Ogden Morrison was born December 24, 1925 to Grace Huwe Morrison and William Morrison in Denver Colorado. He died peacefully March 17, 2022 in Windsor, CO. He was the third of four sons. After graduation from high school in Denver Marks entered the Army Air Corps. He was discharged when World War II ended. Marks married Mary Lillian Robbins on December 21, 1947. Three daughters were born to the marriage: Anne, Joan, and Barbara. Marks attended college at Colorado A&M in Ft. Collins (now Colorado State University). He graduated with a degree in Chemistry. Following college, he began working for International Harvester Company in Cheyenne, WY. Soon he advanced and moved to Scottsbluff, NE. In the early 1950’s he purchased an implement business in Lyman, NE. He operated Morrison Implement for 10 years until he formed Couplamatic, Inc. While running Morrison Implement he developed a machine to repair hydraulic hose in the field, and patented the invention. Manufacture of the Couplamatic machine was done in Lyman, NE and sold all over the world. In 1967 he started House of Hose in Lyman which distributed all types of industrial hose across the US. Couplamatic Systems, Inc is still a fourth generation family business, operating in Scottsbluff/Gering, NE. Marks loved fishing, especially at the family cabin on Little Moon Lake near Henry, NE. During the sport fishing hey days in Mexico, he enjoyed fishing trips to the Sea of Cortez. He also took many fishing trips to Canada with friends and family. Marks and Mary enjoyed many fun years with friends in Lyman, NE and enjoyed traveling around the world. One of his most enjoyable ventures was buying Army surplus and companies that were going out of business. He was a born salesman. In 1972 he purchased the full-scale mockup of the SST (Super Sonic Transport) from the US Government, housed at the Boeing plant in Seattle, WA. He moved the mockup by rail to St. Cloud, Florida and began the process of opening an air museum. The museum housed not only the SST mockup, but the Mercury Capsule, Howard Hughes’ B-25, an SA-16 Albatross, and many other aircraft and exhibits. The SST Air Museum opened the summer of 1973, at the height of the OPEC oil crisis. The museum operated for several years and was sold to a church, with services being held under the wing of the SST. In 2013 the SST mock-up returned to Boeing in Seattle, WA. Marks and Mary retired in the mid 70’s and later moved to Ft. Collins, CO. Having grown up in Colorado, they were excited to return to the state. Marks and Mary continued traveling and visiting family and friends for many years. Marks is predeceased by Mary, his wife of 70 years, his 3 brothers (Bill, Bob & Jim) and their parents and every one of his many friends. He is survived by his three daughters, Anne James (Cliff) of Scottsbluff, NE, Joan Krebs (Rodney) of Chico, CA, Barbara Morrison (Trent Weaver) of Ft. Collins, CO. Also surviving him are his grandchildren, Scott James (Tina), Jennifer James, Seth Krebs (Staci), Cali Miodonski (Karol), & Logan Krebs (Jodi). He had 9 great grandchildren. Marks was a man of many ideas and great energy. He lived life fully and will be greatly missed. According to Marks’ wishes, there are no services planned.

Marks Ogden Morrison was born December 24, 1925 to Grace Huwe Morrison and William Morrison in Denver Colorado. He died peacefully March 17, 2022 in Windsor, CO. He was the third of four sons. After graduation from high school in Denver Marks... View Obituary & Service Information

The family of Marks O. Morrison created this Life Tributes page to make it easy to share your memories.