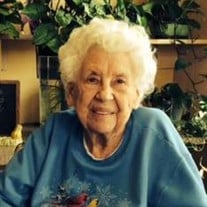 Martha Clara Olsen (Nee Meissner), 101 years of age, with her strong faith, peacefully passed away at 2:00 a.m. on July 18, 2017. Martha was born on December 4, 1915 in the Town of Raymond, Wisconsin. Martha outlived her parents: Gustave & Martha Meissner (Nee Baker), her brothers: Simon, Glenn, Roy & sisters: Donette Geissner, Esther Buschke and Mildred Yurkievich. In her immediate Olsen Family she was preceded in death by her middle son Todd Ellis Olsen, who was killed in a car accident in 1959; and her husband Rodney Howard Olsen, who died from heart disease in 1969. She is survived by her eldest son: Ronald Howard Olsen (Anne) of Laramie, WY: (grandchildren: Todd Olsen (Great Granddaughters: Carmen Olsen, Kaili Olsen (Gr-Great Granddaughters: Kiara Chavez and Olivia Cox); Ronda (Drew) Warnke (Great Granddaughters: Naci Warnke, Aria (Rick) Barker (Gr-Great Granddaughters Madeline and Eleanor Barker); and youngest son Rodney James Olsen (Jean) of Fort Collins, CO: (Grandchildren: Christopher (Daphne Bureau) Olsen, (Great Granddaughter, Olivia Olsen) , Chadwick (Michelle Wilke) Olsen (Great Granddaughters: Lydia , Charlotte and Eliza Wilke-Olsen; and Petra (Heidi Servi) Olsen, (Great Grandsons: Emmett and Jacob Servi-Olsen). Martha had a long full life. As a girl, she helped with her parent's cabbage and vegetable farm in rural Racine County, WI. As a young woman she was wife and mother in the Olsen family, first on Green Street in the city of Racine, WI and later on Stuart Road in rural Racine County. Here Martha was an active mother with her three boys, and she remained very active in bowling, played some golf, was a supporting mother in Cub Scouting & Scouting, as a den mother and was the family chauffer. She found time to be a charter member of an area Sewing Club, volunteer working many projects for the support and building of the Mount Pleasant Memorial Park in Franksville, WI. She worked & volunteered with her husband and family in the building of the Bartlett Youth Foundation on the corner of Stuart Road & Spring Street in the mid-50's. She was a faithful member of Grace Chapel Lutheran Church, Racine, WI. When her boys entered Racine Lutheran High School she was an active member of the Ladies Guild, and she was there to assist the opening of the Thrift Shop which has been a strong financial supplement to LHS. She continued to volunteer & support the Thrift Shop for many years following her boys attendance. After her husband passed in 1969 she had to step in and run the family farm and "Recreare" Campground near Tomahawk, WI. When she sold the farm and campground and retired, she moved to an apartment in Franksville WI for several years, then to a condo Mount Pleasant (Racine), WI. During her years in Franksville & Mount Pleasant she became involved in quilting. Martha does have a quilt on display at the quilting museum in Golden, CO. Martha has always loved to visit antique stores with her sister Mildred; but most of all she enjoyed playing cards with family and friends, basically, Pinochle & Sheepshead. She was an accomplished fishing gramma and taught her son and grandchildren to use her favorite bait "the Pinkie". In her final years she moved to Colorado to be near her sons. A Memorial Service will be held at 11:00 a.m. with visitation at 10 a.m. Friday August 4, 2017 in Racine, WI. Location: Wilson Funeral Home 1212 Lathrop Avenue Racine, WI 53405 In lieu of flowers, a memorial fund has been arranged with Racine Lutheran High School, Racine, WI, and/or Redeemer Lutheran Church, Fort Collins, CO.

Martha Clara Olsen (Nee Meissner), 101 years of age, with her strong faith, peacefully passed away at 2:00 a.m. on July 18, 2017. Martha was born on December 4, 1915 in the Town of Raymond, Wisconsin. Martha outlived her parents: Gustave &... View Obituary & Service Information

The family of Martha Clara Olsen created this Life Tributes page to make it easy to share your memories.