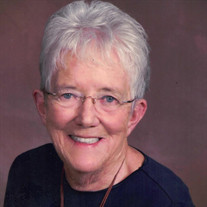 Mary Ann Quinn was born on Nov. 1, 1932 in the Gresham Hotel in Walden, Colorado to parents, Bert Michael Quinn and Sarah Elizabeth Gresham Quinn. She was grateful to have been raised in North Park with its natural beauty and freedom. Mary Ann attended schools in Walden and graduated from High School in 1950. The 14 graduates of this class have remained loyal friends. She graduated from the University of Colorado in 1954 and was a member of Alpha Chi Omega, Pi Kappa Gamma, and Phi Beta Kappa. In 1978, she received a Masters Degree in Special Education from the University of Texas at Austin. In 1954, she married David Stratton, with whom she had three children, Michael, Juli and Elizabeth. They were later divorced. She later married Leslie Joe Friedman with whom she had two children, Cheri and Hal. Mary Ann was a teacher of young children for more than 27 years. She taught in Fort Knox, KY; Boulder, CO; Austin, TX; Fort Collins, CO; and for the last twelve years of her teaching career in a Bilingual Early Childhood classroom in Denver, CO. After retiring from teaching, Mary Ann concentrated on traveling and volunteering for her church and community. She and her life-long friend, Corky Perry, made two trips to their beloved Ireland to become more familiar with their Celtic heritage. Because of Mary Ann’s love of nature and the out of doors she enjoyed skiing, hiking, fishing, identifying wildflowers, and birding with friends. She spent many wonderful days at her cabin near Gould with family and friends. She was a member of Blessed John XXIII University Parish for many years and volunteered extensively for her church on the Pastoral Council, Stewardship Committee, Social Concerns Team, and as Coordinator for Outreach Eucharistic Ministry. Mary Ann spent much of her retirement years volunteering in the community as a Master Naturalist, Raptor Survey Volunteer, and Eagle Watch Volunteer for DOW. She was coordinator of the CAST program for Volunteers of America, receptionist for the Mission at Catholic Charities Northern, and volunteered in Head Start programs at Putnam, Bauder, and Moore Schools. Mary Ann was preceded in death by her parents and her son Hal. Her survivors include her children, Mike (Pam) Stratton, Juli Hobin, Elizabeth Gracesun, and Cheri (Todd) Axtell. Her ten grandchildren are Madeline Stratton; Katherine (Nathanael) Piasecki, Sarah Hobin, and Grace (Blake) Staley; Erin, Cole, and Taylor Deskin; and Paden, Dane, and Trace Axtell. Her two greatgrandchildren are Eliza and Blair Staley. Cremation has taken place. A memorial mass for the family will be held at Blessed John XXIII University Parish at 10a.m. on Thursday, July 16, 2020. Mass will also be streamed live online at https://www.youtube.com/user/RamCatholic. Interment will be in the Walden cemetery at a later date. In lieu of flowers, contributions can be made to the North Park Museum in Walden, the Mission at Catholic Charities Northern, or the charity of your choice.

Mary Ann Quinn was born on Nov. 1, 1932 in the Gresham Hotel in Walden, Colorado to parents, Bert Michael Quinn and Sarah Elizabeth Gresham Quinn. She was grateful to have been raised in North Park with its natural beauty and freedom. Mary... View Obituary & Service Information

The family of Mary Ann Quinn created this Life Tributes page to make it easy to share your memories.