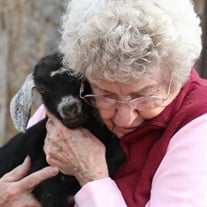 On September 9, 2021, Mary Caldwell, Mama to 1 and Grandma to 6 passed away at the age of 99 ½ years old. Mary was born in Newport, Rhode Island and moved to California at the age of 5. She was raised by her Grandparents, both from Portugal. Mary learned Portuguese, as her grandparents didn’t speak English. She was very fond of her grandparents to whom primarily raised her. They were both hard workers and they had several jobs on the farm. Mary had wonderful memories of the farm, ringing the dinner bell for all the farmworkers to come to the large table to eat, picking vegetables from the garden and playing outside. The farm life is where Mary began her love of animals. Mary’s first husband Charles Ward was the love of her life. They were a Military Family during World War II and they lived together in Hawaii and the Samoan Islands. Mary was on the Naval Base when the attack on Pearl Harbor happened. Charles was away at the time in the Samoan Islands. Mary and their daughter Mary Ann were evacuated to San Francisco during this scary time. Mary said the best sight was when the ship pulled up to San Francisco and seeing all the lights, knowing they would be ok. Charles Ward later built a home for the family in Hayward, California. Later in the years 1969, Mary became widowed as Charles died from a work injury. Mary joined a Sorority in which the ladies had activities and made friends for life. She then adopted her favorite dog a dachshund Mitzie. Later in the early eighties, Mary met Charles Caldwell and they married in 1983. Charles Caldwell and Mary shared the hobby of bowling. They both belonged to a bowling league and won many pins and trophies. They also enjoyed traveling across the USA in their motorhome after retirement. Mary and Charles Caldwell moved from California to Fort Collins, Colorado in 1986. The move was made to be close to Mary’s daughter Mary Ann and the grandchildren. Mary worked at a Lumber General Store followed by Purity Grocery Stores for several years. Mary worked for 14 years as a Veterinary receptionist at Alta Vista Veterinary in Hayward, California before retiring. Working at the Veterinary Office was one of her favorite jobs as she loved animals, especially dogs. Her favorite quote was “God let me be what my dog thinks I am”. Mary enjoyed taking daily walks, gardening, sewing, word search puzzles and was an avid reader. Mary really loved owls and had several pictures/artworks of owls and the family loved to gift them to her. Mary had a wonderful sense of humor and was a very happy person. She loved to organize and was always rearranging items to make a perfect fit. Sometimes she would wake up in the middle of the night and think about the rearrangement of a drawer or furniture. If she couldn’t go back to sleep, she would make herself busy and tidy up. Her last few years she moved in with her oldest Granddaughter Karen on a small farm. She was brought back to a farm to where she could watch the chickens, pet the goats, feed the donkeys, and talk to the pigs. Even when she wasn’t able to get around as well, she could sit and visit for hours. She experienced batches of puppies, kittens, baby goats and more. The dogs would go into her bedroom at night and lick her feet (which she didn’t mind and said they were precious) and the dogs would sleep on her floor. She was never alone, not once. She never really liked cats but learned to love more than a couple. She enjoyed the cat’s company and admitted later that she had grown to love them. She thanked many a times that she was brought to the farm for her last years. Mary was proceeded in death by her husband, Charles. She is survived by her only daughter Mary Ann Myers, Six grandchildren – Mike Markison, Karen (& Mike) Meyers, Laura Markison, Jenny Myers, Chaun (& Talia) Myers and Becky (& Ashley) Myers. She also is survived by 18 Great Grandchildren and 10 Great Great Grandchildren.

On September 9, 2021, Mary Caldwell, Mama to 1 and Grandma to 6 passed away at the age of 99 ½ years old. Mary was born in Newport, Rhode Island and moved to California at the age of 5. She was raised by her Grandparents, both from Portugal.... View Obituary & Service Information

The family of Mary Ward Caldwell created this Life Tributes page to make it easy to share your memories.