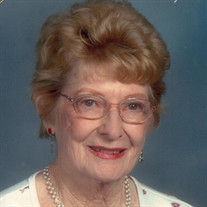 Mary Jean (Griffin) Eglinton, 91; passed away peacefully of complications arising from Endometrial Cancer on August 31, 2018 while in Hospice at Mirasol Senior Community, Loveland Colorado. Mary began her life in Albuquerque, NM on May 1, 1927. She was the oldest of 4 children born to George Thomas Jr. and Mary Ethel Griffin. She had a wonderful childhood in Albuquerque with her sisters Patricia Gainor of San Jose, CA, Theresa Hartley of Detroit, MI, and her only brother Thomas Griffin of Ruidoso, NM. She married the love of her life Robert J. Eglinton on February 3, 1947. They were married for forty-seven years until Robert passed away in 1994 in Atlanta, GA. Mary led a very rich and productive life balancing her full-time career while raising 6 children. She retired from Sears Roebuck after 20 years but continued to work for a number of companies concluding her career as a merchandiser for Hallmark, and finally retiring at the age of 86. She is survived by a large family consisting of her 6 wonderful children, Robert (Laurie) Eglinton, Scottsdale, AZ; Kathleen (Richard) Stencel, Ft. Collins, CO; Michael (Patty) Eglinton, The Villages, FL; Dave (Nancy) Eglinton, Peoria, IL; Steve Eglinton, Middleton, ID; and Tim Eglinton, Broomfield, CO; and her 14 grandchildren, Crystal Vester, Robin Eglinton-Stewart, April Ferguson, Leann Eglinton, Scott Eglinton, Jason Stencel, Justin Stencel, Katie Stencel, Eryn Scherer, David Eglinton, Ryan Eglinton, Heather Wessells, Robbie Eglinton, Symantha Wells; and her 36 great grandchildren. Mary Jean, a devout Catholic, was involved in many activities through the churches she attended while living in Albuquerque, NM, Orange County, CA, Douglasville, GA, and ultimately Ft. Collins, CO. She was a gregarious, compassionate, caring, and giving person who loved to meet people and consequently formed many long and rich friendships. As an experienced MahJongg player, she taught many women how to play the game, and enjoyed the friendships she made along the way. Bridge was another favorite activity, along with baseball, her favorite teams being California, Atlanta and Colorado. Ultimately, Mary was the happiest when she was surrounded by her family. Our Mom was a selfless and devoted wife, sister, mother, grandmother, and friend. Her love was unconditional to everyone in her life. She will be forever missed but her comforting spirit will remain with us for the years to come. Mary’s family would like to offer our sincere appreciation to Mirasol Senior Community and Pathways Hospice of Ft. Collins for their compassionate, loving care of our mother in her final days. Family and friends will gather for a Rosary and visitation on Friday September 14, 2018 at 6:00pm at Goes Funeral Care, Fort Collins. Funeral Mass will be held at St John 23rd September 15, 2018 at 10:30am, followed by a Celebration of Life reception at the Ft. Collins Senior Center, Foxtail Rooms at 1-3pm.

The family of Mary Jean Eglinton created this Life Tributes page to make it easy to share your memories.