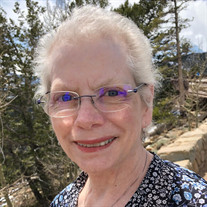 Mary Hill, formerly Mary Hagberg or Mary Croissant, age 72, died at her home in Fort Collins, CO, on May 29, 2021, from pancreatic cancer. Mary was a woman of many names and many talents. Born in 1948 in Michigan to parents Ken and Cornelia Hagberg, she lived there with her parents and younger sister Kristin throughout her childhood. As a child she took ballet and piano lessons – interests she would carry into adulthood – worked hard in school, and spent summers at her beloved Camp Miniwanca. Her early adulthood was spent pursuing higher education and she earned her PhD in sociology from the University of Illinois Champagne-Urbana in 1977. She became a mother when her daughter Carolyn was born in 1982, and she and Carolyn were joined by son Kenny in 1984. The middle section of Mary’s life centered itself around care for children. Kenny was left profoundly brain injured by an injury in early infancy and required complex medical care his whole life. Not expected to live to age 6, through Mary’s efforts he made it to age 26, surrounded always by his family, pets, and loving caregivers. Mary was a tireless advocate for him. She participated in intensive therapy regimes, managed dozens of volunteers who came in to help with his needs, research treatment options, and ensured his needs were met in the educational system, all while keeping an eye on his quality of life and happiness. Carolyn was not neglected during all this. When the public schools turned out not to be a good fit Mary decided to homeschool Carolyn--a job she did so well, that Carolyn graduated with her Associates Degree at age 17 before going on to graduate Summa Cum Laude from CSU and to receive her own doctorate in English from Tufts University. Mary supported Carolyn in her intensive study of ballet, nurtured her love of literature and art, and embraced her many friends with open arms. Mary returned to the workforce as a professor of sociology at Front Range Community College (FRCC) in 1992. She taught part-time until 2000, at which point she became full-time and ran FRCC’s sociology program until her retirement in December of 2016. She inspired countless students in her over 20 years at FRCC, many of whom attribute to Mary some of their success and joy in later academic and life achievements. During her tenure she served as Faculty Senate President and was voted Master Teacher. In 2014, she also founded FRCC’s on-campus food pantry, “Food for Thought”, to address food insecurity amongst the student body. Mary was an active member of Foothills Unitarian Universalist Church, where she served on many committees, participated enthusiastically in congregational life, and taught religious education classes in the secular and humanist traditions of the church. Messages received at the time of her death show that Mary loved widely and well and is remembered not only by her family but also by her children’s friends, religious education students, and academic students as someone who modeled for them what an exuberant, engaged, and adventurous adult life could look like. Mary was someone who embodied the concept of the lifelong learner. A voracious and eclectic reader, she also took up many different hobbies over the course of her life. Piano, ballet, and gardening were lifelong interests but she also loved weaving, pottery, knitting, and needlepoint. Over the past decade, some of her greatest joy came from attending theater productions and museums with her beloved husband John Hill, whom she married in 2011. They brought great joy and love to each other in the course of their too-short union. Another longtime dream late fulfilled came in the form of the several wonderful European trips she and John were able to take together over the course of their marriage. Mary is survived by her husband, John Hill, of Fort Collins, and by her daughter, son-in- law, and granddaughter – Carolyn, Aatish, and Mohini Salvi of Somerville, MA. She is also survived by her stepchildren and their families: Catherine Hill and Chip Grey of Loveland, Colorado, with children Vivienne and Kennedy; and Stephen and Hannah Hill of Seattle, WA, with children Athen, Asher, and Abraham. Her former foster child, Martin Chase, lives in Portland, OR, with his partner and child. Her sister, Kristin Hagberg of Okemos, MI, also survives her, as do her nephew Jacob Romagnoli of sun Valley, ID and niece Gwen Espinoza of Clarkdale, AZ. She is mourned by countless others, far too numerous to mention here, to whom the family is deeply indebted for all they brought to Mary’s life. Mary is predeceased by her son, Kenneth Knox, and by her parents and stepmother, Cornelia Hagberg, Kenneth Hagberg, and Betty Hagberg, respectively. Mary was cremated and her ashes will be kept or scattered by her family members as feels most appropriate to them. Memorial contributions can be made to the Mary Hill “Food for Thought” food pantry at Front Range Community College. Simply go to: https://www.frontrange.edu/about-frcc/frcc-foundation/giving/give-to-front-range-community-college and locate the designation menu, then select: Larimer Campus Mary Hill Food Pantry fund. “You want a physicist to speak at your funeral. You want a physicist to talk [to the mourners] about the conservation of energy so they will understand that your energy has not died… Let [the mourners] know that they can measure, that scientists have measured precisely the conservation of energy and found it accurate, verifiable and consistent across space and time. You can hope your family will examine the evidence and satisfy themselves that the science is sound and that they’ll be comforted to know your energy’s still around. According to the law of the conservation of energy, not a bit of you is gone; you’re just less orderly. Amen.” – Aaron Freeman

Mary Hill, formerly Mary Hagberg or Mary Croissant, age 72, died at her home in Fort Collins, CO, on May 29, 2021, from pancreatic cancer. Mary was a woman of many names and many talents. Born in 1948 in Michigan to parents Ken and Cornelia... View Obituary & Service Information

The family of Mary Hill created this Life Tributes page to make it easy to share your memories.