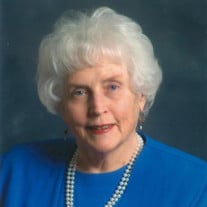 Mary Lee Monroe Birmingham passed away peacefully at home in Fort Collins, CO on July 30, 2021. She was born on December 9, 1928, in Manhattan, NY, to Mary West and Henry Clay Monroe of Scarsdale, NY. Upon graduating from Scarsdale High School, she attended the University of Rochester. While working towards a bachelor's degree in Spanish, she helped create the study abroad program and spent her junior year at La Universidad Nacional Mayor de San Marcos in Lima, Peru. She hiked Machu Picchu and traveled the Amazon River by steamboat, a brave endeavor for a young woman in the 1940s. Her experiences created lifelong interests in other cultures and archaeology. After graduation, Mary Lee was sought out by employers because of her bilingual skills in New York and Florida. She later earned a Master of Education degree in Second Language Learning from Florida Atlantic University with postgraduate studies at Teachers College, Columbia University. At the age of 13, she began researching her family genealogy. She traveled extensively throughout the United States and overseas, gathering information from church records, courthouses, archives, distant relatives, and tombstones. She proved 38 generations which included a soldier in the Revolutionary War, a governor in the American Colonies, and Charlemagne of France. As an accredited Fellow of the American College of Genealogists, Mary Lee assisted others with research and belonged to over 30 lineage organizations, including the Daughters of the American Revolution (DAR), Colonial Dames of America, National Society Colonial Dames of the 17th Century, Descendants of Colonial Governors, Magna Charta Dames, and The Order of the Crown of Charlemagne. She held leadership positions at the local, state and national levels in several organizations while living in Lake Forest, IL, Carefree, AZ, Flagstaff, AZ, and Colorado. She supported historic preservation, military members and veterans, and was an active member of the Cache La Poudre chapter of the DAR in Fort Collins, CO. Mary Lee was also a member of archaeological societies in Arizona and Colorado, and helped to catalog artifacts from the Elden Pueblo site in Flagstaff, AZ. A voracious reader, she read a book per day. She had a great sense of humor and was known as “Lady Flossmore” in the Red Hat Society and the Poker League of Northern Colorado. Mary Lee is survived by daughters Marylee L. Forsthoff of Golden, CO and Georgia A. Birmingham of Lone Tree, CO; son Laurence L. Littell, Jr. of Portland, ME; grandson Alexander W. Forsthoff (Halie) of Durango, CO; granddaughter Julia M. Forsthoff of Bozeman, MT; sister Alice Szwarce of Snellville, GA; sister Denny Geering of Hendersonville, NC; and numerous nieces, nephews, great nieces and great nephews. She was preceded in death by her son, John Monroe Birmingham, and her husband of 53 years, John M. Birmingham, Jr. A private memorial service will be held in Orient, NY at a later date. Donations in her memory can be made to Pathways Hospice of Northern Colorado.

Mary Lee Monroe Birmingham passed away peacefully at home in Fort Collins, CO on July 30, 2021. She was born on December 9, 1928, in Manhattan, NY, to Mary West and Henry Clay Monroe of Scarsdale, NY. Upon graduating from Scarsdale High School,... View Obituary & Service Information

The family of Mary Lee Birmingham created this Life Tributes page to make it easy to share your memories.

Mary Lee Monroe Birmingham passed away peacefully at home in...