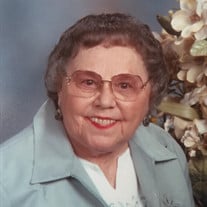 Mary E. Raybourn, went home to join her beloved husband, family and friends on August 4, 2017 at Good Samaritan Loveland Village. Even at the end of a seven year journey into dementia, she never lost her smile, her delightful wit, sparkling laugh and her abundant love for her family and caregivers. Mary also loved anything chocolate, playing card games of all kinds, and spending time with her grandchildren and great-grandchildren. Mary Emma Sallee was born on the family farm outside of Moline, Kansas, the third child of Carl and Dessie Sallee. Mary and her siblings attended Chaplain School, a one room country school and helped out with chores around the farm. When Mary was 13, the family moved to Sedan, Kansas to operate a corner gas station and tourist cabins. Mary graduated from Sedan High School, where she was active in theater, forensics and music, and where she met the love of her life, John Ed Raybourn. Mary and John were married in the First Baptist Church of Sedan on June 5, 1949. They celebrated their 53rd wedding anniversary shortly before John died in 2002. Mary spent her adult years as a homemaker, caring for her daughters Jan and Judy. In the early years, she spent time packing and moving as John’s career took them to Washington D.C., St. Louis, Philadelphia, Ohio, Virginia and ultimately, to Lakewood, Colorado, where they made their home from 1965 until 1980. When John retired, they sold the family home and began traveling across the country full-time in their RV. During the summer, they volunteered as campground hosts at Bumblebee Campground in the Idaho Panhandle. In 1984, they even volunteered at a remote fire lookout called Surveyors Ridge. After seven years on the road, they built a retirement home in Mesa, AZ, where they developed deep friendships, square danced and continued to travel. Mary and John moved to Fort Collins in 1996 and were active members of the Fort Collins First United Methodist Church. After John’s death, Mary moved into an apartment in Good Samaritan’s Fort Collins Village where she enjoyed many years until advancing dementia necessitated her move to Heritage Square in Good Samaritan’s Loveland Village. Mary’s family would like to express our immense gratitude to the amazing staff at Good Samaritan who all took such wonderful care of her. We will be forever grateful for the excellent care, unbelievable patience, quiet compassion and unconditional love they gave to Mary, and her family, over the years. Mary is survived by her daughters, Jan (Duane) Sawyer and Judy (Pat) Smith; four grandchildren, Jessica (Brandon) Byrne, Amanda (Michael) Dahlman, Larissa (Tom) Smailes and Shane Smith; and great-grandchildren, Carter, Samantha, Colter, Lily, Lucas and Samantha. A celebration of Mary’s life will be held at 10:00 a.m. on Saturday, October 7, 2017 in the Chapel at Good Samaritan Loveland Village, 2101 S. Garfield Avenue in Loveland. The family requests that in lieu of flowers, memorial donations be made to Good Samaritan Loveland Village or Pathways Hospice.

Mary E. Raybourn, went home to join her beloved husband, family and friends on August 4, 2017 at Good Samaritan Loveland Village. Even at the end of a seven year journey into dementia, she never lost her smile, her delightful wit, sparkling... View Obituary & Service Information

The family of Mary Emma Raybourn created this Life Tributes page to make it easy to share your memories.